It's Friday, the Start of a "Grounding and Bonding" Weekend!

Going to try and plant the first of my three ground rods tomorrow, and I'll be using my "Deep Root Watering" yard tool so I can at least get the first 30" of rod slid in before I use my ground rod driving attachment in a demolition hammer to drive it in the rest of the way. 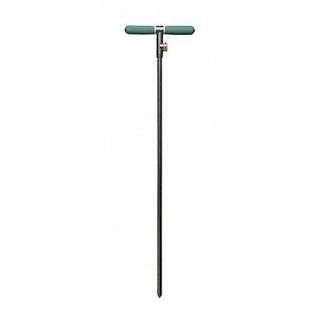 This isn't the exact one I have, but it's very similar. It's a steel tube with a hard point on the end, and three holes to let the water out. You turn the water on a bit, and then push it down into the dirt, which usually dissolves and moves out the way, allowing you to insert the rod down to about 30". Unless you hit a rock, in which case you lift it up, move it a few inches, and start over. I'll leave the water on a trickle for a few hours like when I water the trees, and hopefully enough will collect in the soil so the remaining 6' of ground rod can be driven in.

And this yard has LOTS of rocks in places! It usually takes me three or four tries over by the ash tree before I can get the rod inserted beyond 6".

Once you have the hole made, you insert the ground rod, tap it down until it hits the bottom of your new hole, and drive it in the rest of the way using an adaptor: 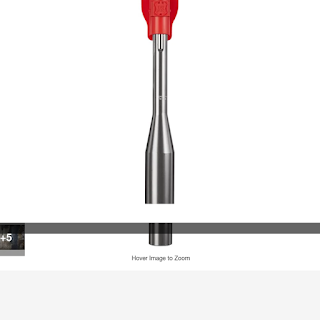 In a demolition hammer: 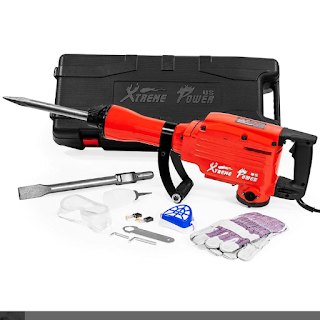 I've done this before, and using the power tools is far better than battering the end of the ground rod with a sledge! It's also reeeal hard to smack a ground rod that's still 6' out of the ground and waving around in the breeze while you're trying to stand on a ladder. With another set of (gloved) hands to help keep the rod vertical, you just hold and guide the demo hammer, and let it do the work.

At the top of the ground rod will be a set of solid copper plates that clamp the rod, and allow me to mount the surge suppressors, as seen below, fully assembled. 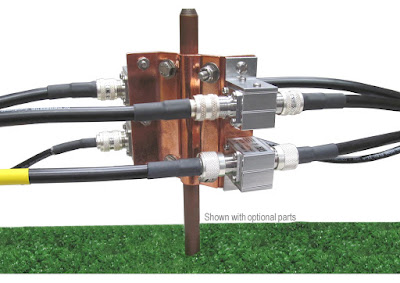 This will be mounted at the house, just below my "Coaxial Entrance Box", where the cables enter the house.

At the base of each of the two 4x4's I'm planting as antenna supports will be another ground rod/surge suppressor, and those two rods will be bonded together with some #2 solid-copper wire. I'd go the full "Perimeter Ground" route, but the cost of the copper would be excessive, and there might be a code issue with bonding it to the main house ground, aka "Utility ground", which is usually how it's done.