Well, I finally got the operating desk rearranged, got the new matching unit wired in and configured, and went in search of the 13 Colonies stations. This event in held yearly, the first week of July, and this year I thought I'd give it a try. Please excuse the crude wood blocks propping up the front of the radio. They were expedient, and will be replaced with something that looks nicer. And I have "RipTies" stuff I'm going to use to tidy up the cables dangling behind the desk. 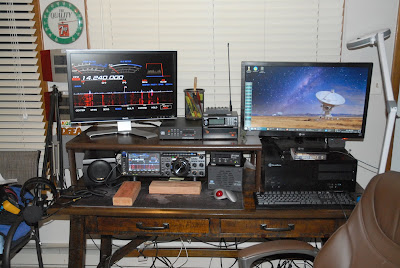 There are 13 stations, plus three "bonus" stations, and whether you work one of them, all of them, or all with the bonus stations, you can get a nice certificate. 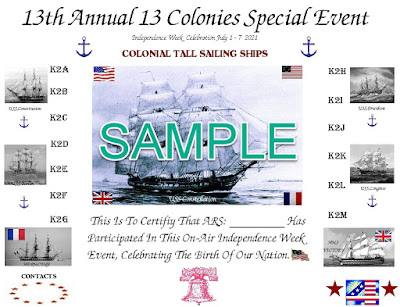 Some people sniff at it for being a "Participation Trophy", but events like this are very good for contacting states with few Hams, like Vermont. One of the QSL cards I have from Vermont says "Vermont-----AT LAST!"  across the top of the card. There are "Official" awards issued but the ARRL for things like "Worked All States", "Worked All Continents", "Worked All Zones", and at the top of the awards heap is the "DX Century Club" (DXCC), for people who have confirmed contacts with at least 100 countries. And within these individual awards are endorsements for things like making all of the contacts on each of the five "Classic" Amateur Radio bands, namely 80 Meters, 40 Meters, 20 Meters, 15 Meters, and 10 Meters, a total of at least 500 contacts. A friend of mine has the "Worked All States" award with a special endorsement for doing it on 6 Meters, the 50MHz band. It took him over 10 years to do it, but he did. Some people have spent decades "Chasing Paper", but I've never really done it. I had 42 states confirmed as a Novice in 1964, and most likely have worked all 50 states, but not all from the same location.

Anywhoo......A special event or other contest is a good way of seeing how good your station is, as the bands are crowded, and the signals range from "ESP Level" to "Blow Your Headphones Off", and it can be very hard to make contacts. A very strong ("S9" or better) station 1kHz away from a station only 5 or 6dB above your ambient noise level can be extremely difficult to receive. My little K2, while a very good, single-conversion design, gets all flummoxed under these conditions, and can actually be unpleasant to operate at times.

So how did the new Yaesu perform? Spectacularly. I've had a lot of radios over the years, both high-end, and bare-basics, and this rig is the best I've ever owned. The filtering is superb, and with the DSP, you can easily reduce the bandwidth to 1500 Hz, and still understand the other station. I can easily hear a weak station 1~2kHz away from a strong station, with no "Bleed Over" or funny Donald Duck sounds.

And I was able to contact 11 of the 13 stations, and one bonus station. I missed both North and South Carolina because I could never hear them, even using the "spots" on the DX Clusters to locate what frequency they were using.