Managed to get a few things done today while The Little Guy was napping, and after he went to bed.

I can't believe how much energy TLG has. One minute we're zooming around playing "Pirates", and the next we're in his "Paw Patrol" room building Lego structures we can smash vehicles into. Or he'll get out his big plush Godzilla, and wade through the center of (his little) town.

While playing "Pirates", character "Jack", his glittery skull with light up, flashing, color-changing LED eyes quit working. That entailed a small side trip down to the Electronics Shop where we "performed surgery" on Jack. Old Jack needed an emergency battery-ectomy, and after the patient was safely in PostOp, TLG broke out in a great big smile and thanked me for "saving Jack's life". TLG was an excellent Assisting Doctor, handing me the instruments I asked for (really...he knows the difference between a cross-point and a flat-blade screwdriver!), and watching intently as we operated on Jack. He loves watching me when I'm fixing something of his or Grandmas, and it usually involves small tools, batteries, and/or glue. He's not to the stage of asking "WHY?" yet, but I'll do my best to keep him quite entertained with little demonstrations and experiments when he does.

I started on some of the "mechanical" work on the transmitter today, like tightening ALL the chassis hardware, and 90% was loose. Not "finger loose", but anywhere from an eighth-of-a-turn loose to a quarter-turn loose, which is pretty loose when it involves grounds, like most of these were.

Then I pulled the AC Input socket so I can open up the hole and replace it. 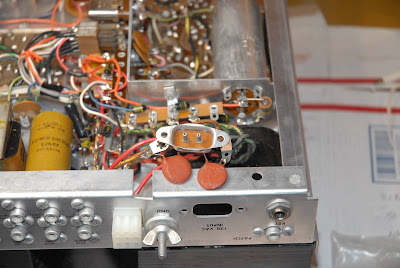 Another connector I'm changing is the Receiver Antenna jack, which is an RCA phono jack, just like on the receiver I just finished.

Here's the new BNC in place, with the OEM connector above it. The red wire gets moved to the center pin of the new BNC connector. 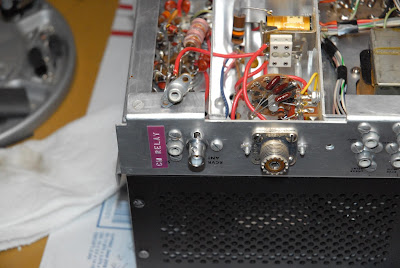 And this is where our friend Murphy sticks his head in the shop....

See the nut? See the shield wall? See any room for the nut to turn, let alone get a wrench on it? Yeah, I don't either. 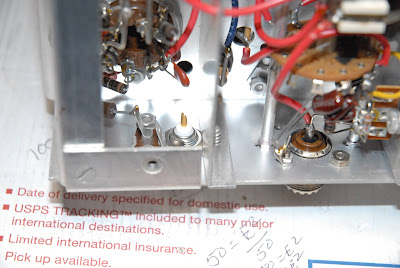 The wrench flat of the nut is zero-clearance with the shield wall running vertically. Now at some time, I had a "Special Service Tool" that was a socket that slipped over the outside of the BNC connector, grabbed on to the two bayonet pins, and let you crank down the nut on the back of the connector as tight as you pleased. It was such a cool tool for Radio Guys, that I've bought several of them over the years. They either get loaned out and never returned, they just "disappear", or in some cases I gave/sold a couple to people.

And now I can't find the one I thought I still had! RATS! Time to improvise here....

Start with some generic BNC I have a bunch of that has a male plug as part of it: 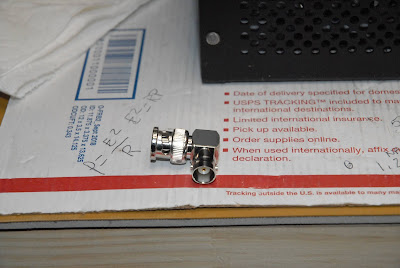 Clamp it in a vise: 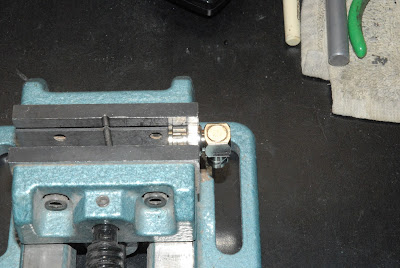 Attack it with my Dremel and Mr. Cutoff Wheel: 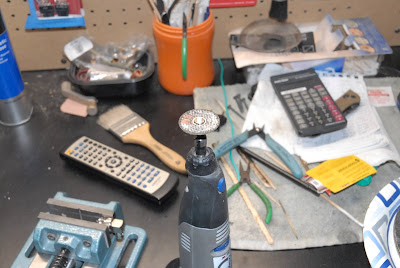 And wind up with just the Coupling Nut part: 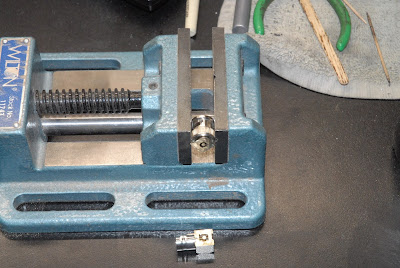 Which nicely fits on the new Receiver Antenna jack, and lets me use a small pair of Channellocks to get it nice and tight. The oddball, mismatched hardware holding on the big connector to the right of the new one will be replaced with new cross-point hardware. 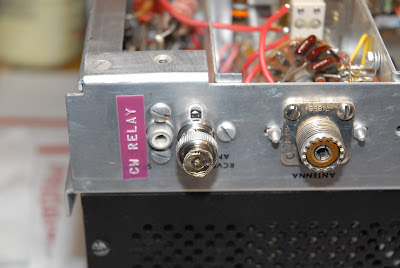 I ordered all the replacement tubes I needed today, and several each of the others unique to this radio. I also ordered some more of the AC Input sockets, as I can't find any of the others I thought I'd bought before we moved here. Seeing as I've been doing "Deep Dives" into my parts stock the last week or so I would have figured I'd find them, but no soap. I have found some things I thought were lost forever, and I'm finally getting the parts at least sorted into categories, like "Resistors", "Capacitors"< "Diodes", and things like that.

So for the next few days I'll be busy cleaning and lubing all the switches, looking for poor soldering/sloppy workmanship issues to correct, tightening hardware, and doing the whole "Mechanical Dial Alignment" procedure like I did on the receiver.

To motivate myself to keep going, I moved my "#1 Boat Anchor Station" upstairs, and plunked them on the operating bench.

I really want to get these two guys rebuilt. These were what I would have gotten instead of the Heathkit rigs if money had been no object. 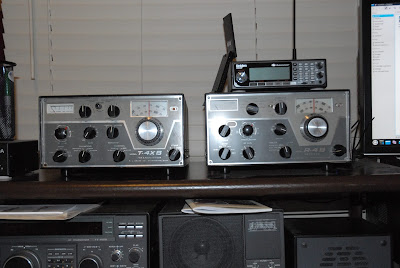