After spending about 30 minutes reading the manual for the tube tester, it turns out I wasn't using it correctly. I didn't damage any tubes I've previously tested, but the measurements are meaningless.

Anywhoo.....I found one tube that gave a "Merit" reading of 80%, which is the lower limit of the "Good" scale on the tester's meter. I pulled one of my new tubes from stock, and it read over 120%, as did several others from my stash. It's a 6AU6 "Sharp Cutoff Pentode", a very common tube, and there are three of them in the radio. One is used for the 100kHz crystal calibrator, a frequency reference used to calibrate the main tuning dial, and the other two are used as mixers, a type of frequency converting circuit.

With that out of the way, I pulled all the knobs off, as some of the panel bushings were loose, allowing the shaft the knob mounts on to be loose and wobbly in the panel. I also cleaned any old lubricant out, and added a drop of synthetic oil to smooth the action. I then cleaned the old lube from the detent mechanism of the rotary switches, and relubed them with some Mobil1 red synthetic grease. Then on to cleaning the potentiometers and rotary switch contacts with some DeoxIT cleaner. All the switches and controls now turn much smoother than they did before, and no more wobbly knobs!

And I tightened all the hardware on the chassis, some of which was a bit loose. Since some of these are used as tie-points to ground, retightening the hardware helps ensure I don't have any poor ground connections, which can cause noise, oscillations, and other gremlins.

Replacing the electrolytic capacitors on this radio is fairly easy. There are 4 lead-mounted capacitors under the chassis, and one large can-type mounted through the chassis.

Original parts. The three pinkish cylinders are capacitors, as it the smaller black cylinder. 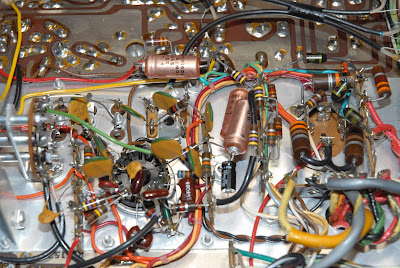 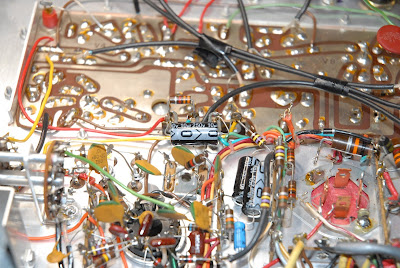 The big can cap mounted from the topside has four terminals, and four locking tabs, and most are used as tie-points and component mounting. 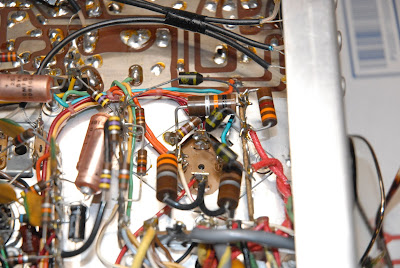 It's a bit crowded in there! 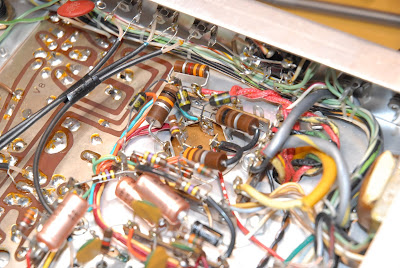 The three black "bullets" with yellow lettering are the original silicon rectifiers that I'll be replacing with more reliable "modern" units. These are rated at 500V and 750mA, while the new ones are rated at 1000V and 1 Amp. They also have much better "surge" ratings, which means they're stressed less at a cold turn-on, when the capacitors draw maximum current.

Out with the old, and in with the new. You can see one of the new rectifiers installed just above the largest brown cylinder with the color stripes. It's the small, black cylinder with a silver stripe on the right end. 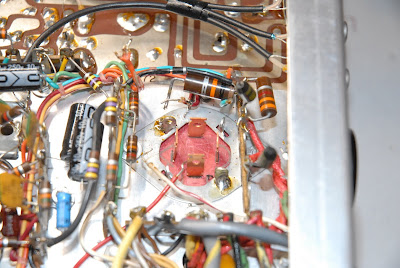 I'll do some clean-up work tonight to get the solder flux bits and other loose trash out of there before I put the components back in. I'll also spend some time checking the soldering, as I found a couple of almost-cold (dull and grainy looking) connections. I also don't care for some of the workmanship by the original builder. He left some component leads longer than I would have, and a lot of them are just stuck through the lug and soldered. Proper technique should be to bend the lead around the lug before soldering, ensuring a solid mechanical connection. In some cases there was enough lead length left to do a partial wrap after I removed the solder, and in other cases there wasn't. Worst case was the lead had at least enough to make a 90* bend, which is better than just stuck-through-the-hole, but still not correct by the accepted standards in use.

At least they left a lot of length on the leads that were just stuck-though-the-hole, so once I remove the solder I can bend the excess length around the terminal or slot that it goes through, and then resolder.

This unit isn't as bad as some I've seen that made me wonder how it ever worked in the first place, but then it's not nearly as nice as others I have. It's a gamble you take whenever you buy a kit built by someone else. Sometimes the original kit builder did a beautiful job, and sometimes they didn't.