The power transformer about threw me for a loop, as when I looked at the first pictures of the radio, I noticed what appeared to be tar leaking out, generally an indication that the transformer has been overheated, either by a component failure, or due to a shorted turn in the transformer itself. Closer inspection revealed the "tar" was the insulating varnish used when the transformer was manufactured.

This is the picture that gave me pause. The bottom side of the transformer is the black rectangular object with the green, red, and blue fabric-covered wires coming out of it. It also looks like something "leaked" out of the transformer, which I immediately assumed (from the picture) was tar. 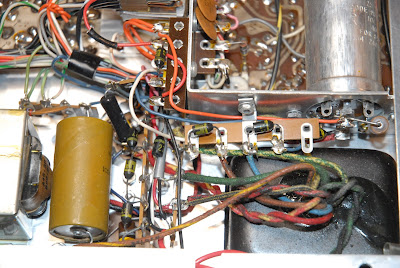 WELL....happy, happy, joy, joy, it's not tar. When I went back to examine things closer, I noticed the same "globby" looking stuff on the top of the transformer, and that's when I realized what it was. 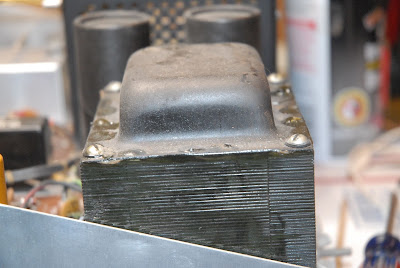 It even shows up in the assembly manual, as this picture of the picture in the manual shows. 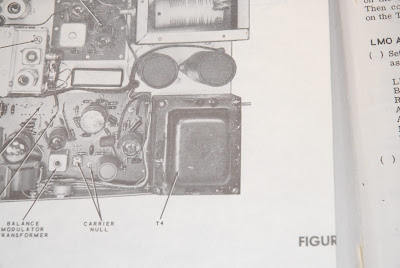 Here's a side-view of the power transformer showing how thick the coating is. 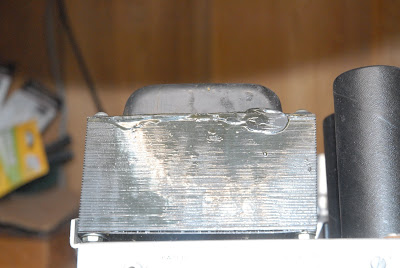 So, with the transformer cleared as fit-for-service, I proceeded to test all the tubes.

OOPS....got three bad ones, all leaky. Not shorted, but leaky in the Megohm range, which means toss it. I had one of the tubes in stock, but the others will have to be ordered. Not a big deal, as they're readily available, and since the two I don't have are also used in my Drake T-4XB transmitter, and my Hallicrafters HT-44 transmitter, I'll order up a half-dozen. I should probably also refill my 6AU6 stock, as they're also used in my other radios, and the SB-301 receiver needed one, and now this transmitter needed another one.

And I still can't find my doggone RF Probe, so I'm either going to build one in a little Pomona box, or price out and order another. The Heathkit probe works, and is accurate, but it has a huge probe tip, and is cumbersome.

The Little Guy will be here for his Sunday overnight, so I'll have to confine my work activities to his nap times and after his bedtime, if he hasn't completely worn me out!