WWV on 15MHz with a few feet of wire. "S-9" signal, and the antenna is several feet below ground level. 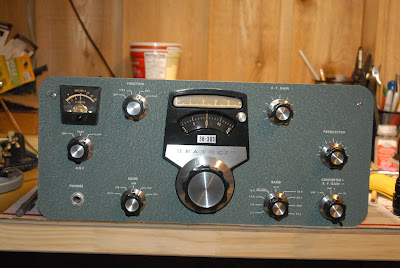 I'm just about to call this one a wrap. As with all the equipment like this I rebuild, I'll let it sit for a couple of days, and then go through it again before I put it back in the case. Sometimes my eye/brain combo needs a rest, and I might just pick up on something I missed the first few times through.

And speaking of things I missed......I forgot to clean the two switches on the front panel while I was busy scrubbing away at the three under the chassis. The "Function" switch was the first one to get cleaned, and then the "AGC" switch. The AGC (Automatic Gain Control) circuit is very important in the radio, as problems in the circuit can make the radio either "deaf" (no gain, or amplification), or overly sensitive (too much gain), which will cause distortion on strong signals. I'd noticed some oddness to the way the AGC circuit was operating, and after I cleaned the switch contacts, I started resoldering the connections to the switch. The first one I went to resolder popped off the terminal as soon as I touched the iron to it! This one wasn't a case of the lead just being stuck through the terminal and soldered. It was just resting on the terminal (like a "Lap Joint"), and was very poorly soldered to it. It looked like the kind of soldered connection that would get you flunked in a soldering class, and between the dirty contacts and bad soldering, was definitely causing problems in the AGC circuit, which now works "As Advertised".

Cleaning these two switches, and resoldering the connections to them, pretty much cleared up the last few issues I was having with the set behaving oddly, so I ran the calibration procedure again, which went smoothly. I was able to get the dial mechanical zero properly adjusted, and by tuning in WWV on 15MHz, I was able to "Zero Beat" the Crystal Calibrator to WWV, meaning the calibrator is calibrated.

The last thing I did was to run the alignment procedure again, but this time with the Main Tuning set for the middle of the band. Sometimes this allows you to pick up some sensitivity in the section of the band you most frequently operate, and it made a very slight (1/2 S-Unit) improvement.

So, I'll let this sit a day or two, and then move on to the SB-401 Transmitter. Before I tear into the transmitter, though, I'm going to go through these two items: 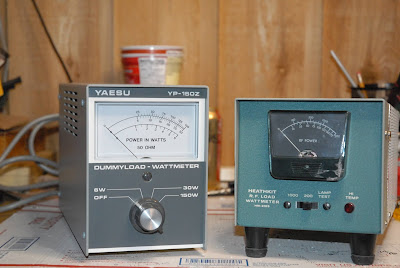 I have Dummy Loads, and I have Wattmeters. These two are self-contained, and one of those "Handy-To-Have" items. I know the Yaesu one on the left works. I suspect the Heathkit one on the right also works. However, I have no idea of the calibration status of either. Again, I suspect the Yeasu is pretty close, but I have no idea about the Heathkit unit. Since it's a Heathkit, purchased on eBay, it's most prudent to assume it DOESN'T work. The Heath unit requires a 9-Volt battery for the "Hi Temp" warning light, so I have to open it up for that, and I might as well check it and calibrate it. Since I have an accurate RF Probe, it's a simple matter to use one of my transmitters to generate the 100 Watts of RF, which corresponds to 70.7 Volts across the load resistor in these, and then set the calibration controls so the meter reads 100 Watts.

After I've checked/calibrated these units I'll move on to the SB-401 transmitter, which I'm guessing needs as much work as the receiver did.....