Spent yesterday cleaning all the switch contacts on all of the rotary switches in the receiver.

As an example, here's a set of contacts before cleaning: 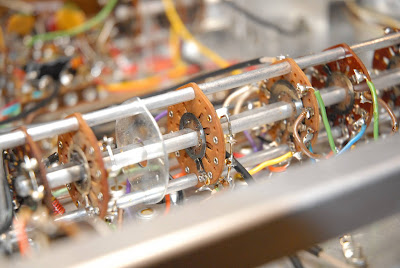 And here's after cleaning: 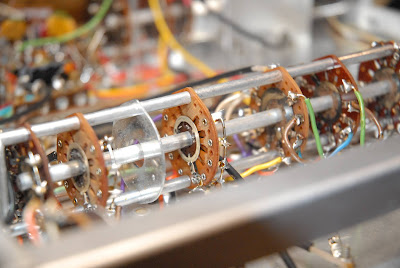 The contacts consist a silver-plated ring that rotates when the switch shaft is rotated, and a fixed contact that touches the rotating ring. I clean them with Tarn-X and a cotton swab, and then flush them with Isopropyl Alcohol to remove any remaining Tarn-X, and then treat them with DeoxIT, which helps prevent the tarnish from returning.

As you can see, I had a lot of contacts to clean on just the band switch, and there are contacts on both sides of several of the "wafers" making up each section. 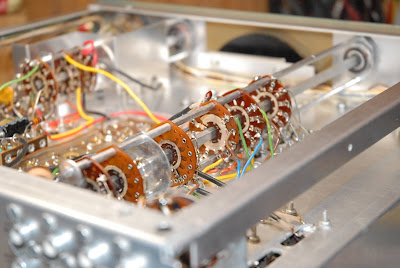 And here's the mode switch after it's bath: 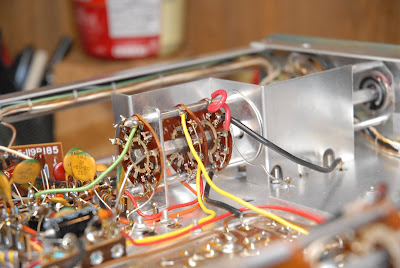 And along the way I found some more iffy soldered connections, so I wicked the old old solder off, bent the "excess lead length" around the terminal, and resoldered the connection.

The last thing to do was replace all the old hard, brittle RG-188 coaxial cables with new RG-316 Teflon insulated cables.

Each one of the ten such cables in the radio was unsoldered, removed, and used as a length guide for each new cable. The RG-188 cable is more flexible than the the RG-316, so in some cases I had to make the cable longer so I could snake it in, and in other cases I had to shorten it a bit.

I cleaned each terminal after I removed the old cable, wicking off the old solder and tinning the terminal with fresh solder. Then each end of the cable was soldered into place on the terminal, jack, or circuit board pad.

Tedious work, but I got into a rhythm of remove, fabricate, replace, and finally finished up around 0030. Some of the new cables may look a little "tight", but there's slack in them, it just doesn't show well in the picture. 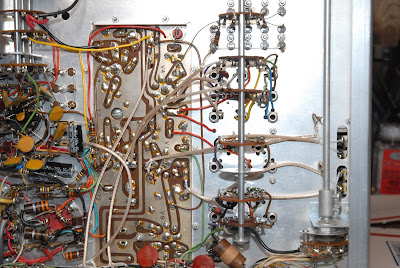 So the test gear is warming up down in the workshop, and I'll start the alignment procedure again. If cleaning the switch contacts and replacing the ancient coax doesn't clear up the issues I found on Friday, I'll have to start poking around in there on a point-to-point basis, starting at the antenna connector, and moving along to the speaker.

This was sometimes referred to as "Hand-to-Hand Chassis Combat" by the Old Timers who taught me a lot of this stuff.

I'll do a "wrap-up" post on this tomorrow, but it appears to be fully functional, and seems to meet specs for sensitivity. When I first started aligning it, it took 30 MILLIvolts to get an "S-6" signal. Now that it's been aligned, a 30 MICROvolt input gives me an "S-9" reading meaning the receiver is now 1000 times more sensitive than it was when I started. Dirty switches, poor soldering, degraded cable, lots of little things.