As I was doing some clean-up work and just "spinning the knobs", I noticed that the main tuning knob seemed to be binding up over a segment of it's rotation, and was hard to turn at the upper end of the dial. Peeking/poking/peering into the innards as I rotated the knob, I noticed something appeared to be wobbly or misaligned, so I took a deep breath and began the disassembly of the front panel.

Off with the knobs! 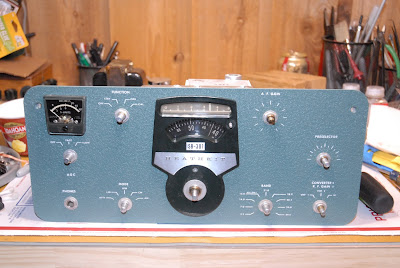 Then remove the mounting hardware from the controls, and wiggly-jiggly slide the front panel assembly off the shafts. 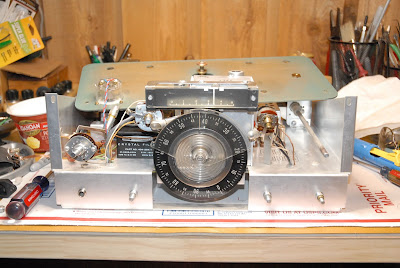 The first thing I noticed was the clear plate with the fiducial marker on it was binding on something, so I pulled the dial assembly off the tuning shaft to get a closer look. 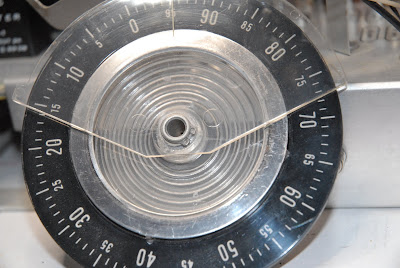 I took off the retaining ring and inspected the parts.

Definitely binding on something from the circular scratch marks. 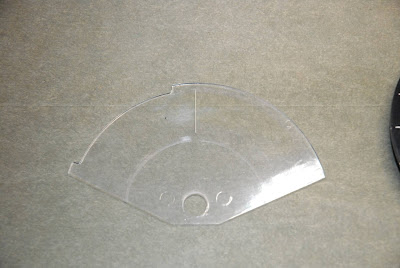 Turns out the shiny metal ring that was attached to the dial itself had popped loose. It was pressed on to the dial, and had little tabs that were bent over to hold it in place. Over the years, one of the tabs loosened up, and allowed the metal ring to pop loose and move away from the dial by a bit more than the available clearance between the parts, and causing the two parts to rub together. I pushed the metal ring back into the dial, and rebent all the tabs, and now it fits flush again on the dial. 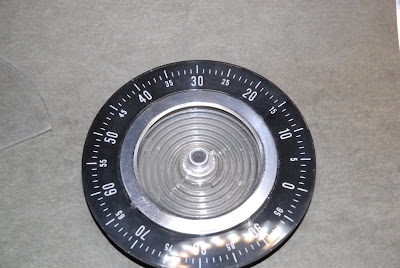 The metal ring is part of the drive assembly, and uses a "Pinch Roller" on a shaft to turn the dial. The Main Tuning knob goes on the shaft, which rotates the pinch roller, turning the numbered dial, which is attached to the tuning shaft of the LMO, the "Linear Master Oscillator", and tunes the radio.

All back together and back on the radio. The original lubricant was all dried up, so I cleaned it off and put a bit of silicone grease on it, a very good lube to use in a plastic-on-metal situation.

And I cleaned and polished the various plastic bits. 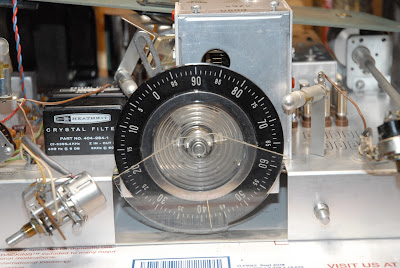 Now for the fun part, and a main reason these radios have a love/hate following.

So, have I turned the dial twice? Four times? In order to keep track of the total turns of the dial, Heath molded-in a spiral pattern into the back of the dial, which you can see through the clear plastic center of the dial. The spiral is engaged by a little nylon pin on an arm with a slot in it. You can see the arm sticking out from behind the dial, between the "0" and "95" numbers on the dial. As the dial is turned, the nylon pin follows the spiral, and moves the arm from left to right. The slot in the arm engages a pin on the back of a sliding dial pointer, which moves from 0 to 5, indicated which 100kHz section you're tuned to.

Hard to explain without better pix or a drawing, but here's the "Hundreds" marker back in place. 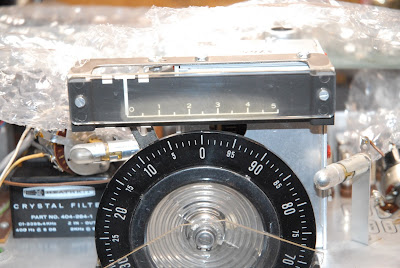 The love/hate part comes with getting these parts to all play nice, so the marks all line up and track properly. It wouldn't look good if the dial was on "Zero", but the sliding hundreds marker indicated "250" instead of "200", so Heath built-in some adjustments.

The metal arm is attached to the chassis with two 6-32 screws, nuts and lockwashers. The chassis holes are slotted horizontally, while the holes in the arm assembly has them slotted vertically, allowing a two-axis freedom of movement. Getting the arm screwed down to the chassis in the correct left/right, up/down position so that the hundreds pointer agrees with the dial takes a LOT of patience, but once you've done it (a few times.....) you get the hang of it, kinda like sighting in a new scope. A little to the left, a little bit up, oops, now the zero is off so reset that, spin the knob over it's whole rotation, and rats, now the "5" is off again, and on and on. Eventually you get it to track, where the "Zero" on the dial and the major divisions of the "Hundreds" slider all match up and follow each other over the entire range, like this: 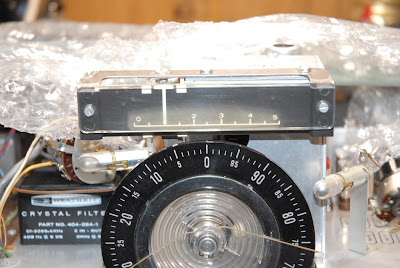 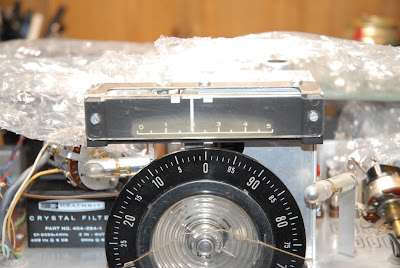 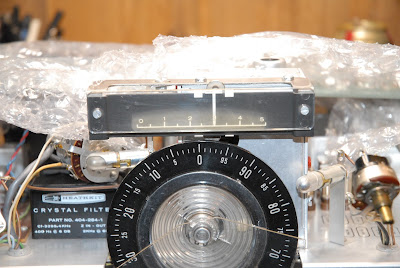 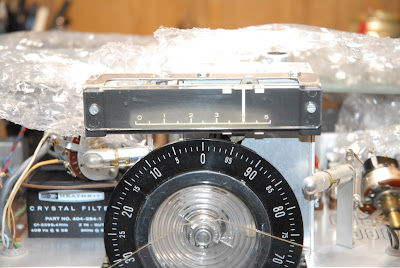 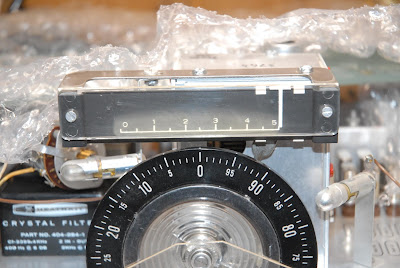 And there's some slop in the dial that I don't remember from the SB-310 Shortwave version of this I restored a few years ago, so I'll look into that, but short of replacing the plastic parts in the dial mechanism, I don't think there's much I can do about it. Perhaps if I slide the dial a bit further in on the shaft, which would engage the nylon follower pin a bit deeper in the spiral groove, it might help.

And the haze on the clear hundreds marker? Well, it's on the inside of the plastic piece, and if I tried to polish it off I'm afraid the numbers would disappear, too. I've already tried gently cleaning it with plain water, and then some highly diluted soapy water, and it won't budge. I'd try some Windex, or my "Special Sauce" cleaner, but some of the Heathkit lettering is extremely easy to damage, and replacement parts only come from "Parts Radios". Fortunately, I found one on ePay, so I can swap out the clear part when it gets here.