In the process of doing the initial steps of the alignment, I noticed a few things that didn't seem right, like the signal from the Crystal Calibrator not moving the S-Meter, and not being very loud in the speaker. In fact, there didn't seem to be much audio at all. The next step of the alignment was to adjust the "Heterodyne Oscillator" coils for a certain voltage at a test point, and they were all off. Some need over half a turn of the "slug" in the coil, which is quite a bit.

I then injected at signal at the input of the 1st I.F. amplifier, and tuned the two "cans" in the I.F. section for maximum output. One of those was spot-on, but the first one needed about a quarter turn of the slug, not off very far.

The next step was to adjust all the coils in the RF Amplifier plate circuit for maximum output, and that proceeded normally.

Then I got to the Antenna coils, which are in the grid circuit (input) of the RF Amplifier, and say what? The adjustments had NO effect, on any of the bands. Seeing as this is the "Front End" of the radio, where both over the air signals and the Crystal Calibrator begin their journey to the speaker, a problem here will knock the sensitivity of the radio right down into the dirt, and not in a good way.

So, after studying the schematic and learning the signal path, I started looking for obvious problems. One thing I noticed right away was that moving some of the wiring around made the static/background noise increase, and moving some other parts of the wiring around resulted in large bursts of Really Crunchy Static that about blew the little speaker I was using apart.

Hmmmm...think I found my "Missing Audio" problem, too.

The bandswitch is the long shaft, second from the one on the right, running from top-to-bottom in the picture below. It switches the Heterodyne Crystals, the RF Amplifier coils (both sets), and the Antenna coils, which are at the bottom of the picture. Yep, the area I need to redo is the most crowded section of it. 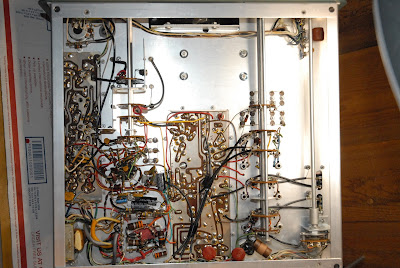 Well, it's small, and being made of plastic, is prone to melt if improperly soldered. If the insulation melts enough, the center conductor can touch the shield, shorting out the cable, or worse, almost shorting out the cable. Then when the cable gets flexed or vibrated, you can have an intermittent short, which can be very frustrating to find.

In the picture below you can three of these cables "landing" at their designated connectors on the bottom left. They're small for 50 Ohm coax! 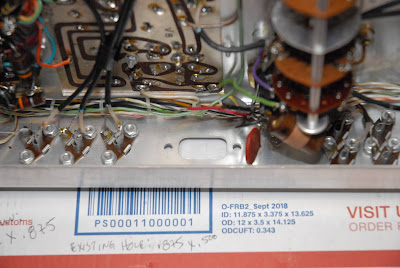 All of the RG-188 cable will be replaced with Modern Era Type RG-316 Teflon coaxial cable. It's next to impossible to melt at normal soldering temperature, and it has slightly lower loss due to the center conductor and shield braid being Silver plated for increased conductivity. It's great stuff, and you can also use it for a rugged, easy-to-conceal microphone cable, too. All of the connections to the contacts on the switch will the solder removed, they'll be cleaned, and then resoldered.

One of the things I think I'm going to have to do is clean the switch contacts with Tarn-X as the DeoxIT compound I use isn't aggressive enough to get this heavy a tarnish off the silver plated switch contacts. I've used Tarn-X before, and it makes the switch parts look new.

After two days of correcting "iffy" solder joints, I'm just going to take off and nuke that corner of the chassis from orbit, and then rebuild it.