For the most part. It's still windy (30+MPH) and gusty (45MPH), and that's expected to continue through the night as the 'backside' of this low pressure system clips us as on it's way out as it moves to the Northeast.

Most of Western Nebraska is shut down, along with big sections of Eastern Colorado and Eastern Wyoming. The Dakotas are next to get clobbered, and all along the Eastern front of this massive low pressure (981mB) system tornadoes are popping up with big thunderstorms.

By now you've heard of the semi getting blown over and the train getting blown off the tracks. The guys on the Weather Channel are comparing this to a tropical storm, due to the very low barometric pressure, the level of the winds, and the amount of moisture it brought with it. I think it's a valid comparison, but had never considered it until I saw them chart similar storms that happen during the late Spring and through the Summer, and the similarities were striking. 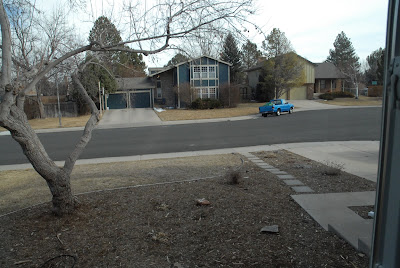 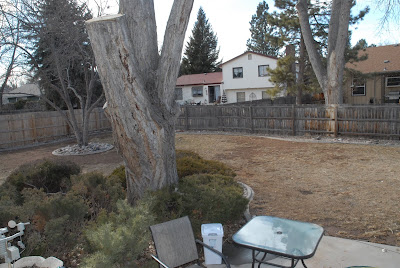 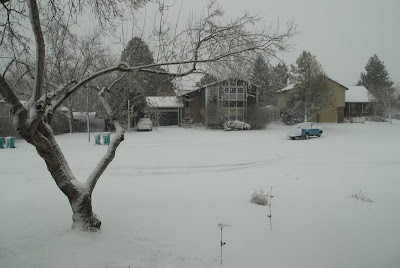 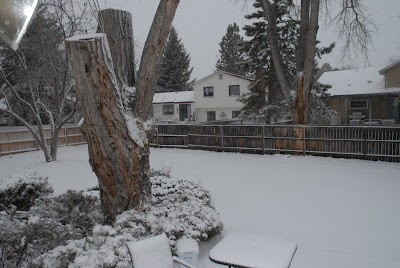 We didn't get nearly as much as was forecast, at least not in this part of town. I'd guesstimate maybe 3"~4" total. It started raining, then switched to sleet, then very fine sugar snow. By 1300~1400 it had changed to big flakes, and then tapered off and quit. The Cheyenne weather radar shows the system 'collapsing' and the 'eye' moving to the Northeast.

It left a little snowdrift at the back door: 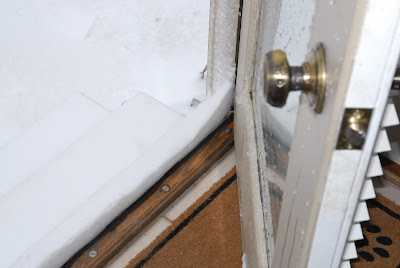 Which Pebbles blasted right through when she finally decided to go outside at 1430, some 16 hours since her last pit stop.

Pretty much everything East of here is shut down, and I saw some reports that the ranchers may need the Air National Guard to help them get feed out to their cattle. And it's calving time, and they're worried they're going to lose a lot of calves this Spring.

This is a very powerful storm covering about 8 states, and you just don't screw around with this weather unless you have to.

And as of 1815 I see they've declared "A State of Emergency" in Denver. Looks like all the freeways around and through the city are jammed with vehicles going absolutely nowhere. I heard some radio chatter on the scanner discussing it, and talking about what exits to use, and where people could stay.
Posted by drjim at 7:34 PM