"Jeremy" (the "J" in "JW Logistics"?) called me again this morning about 1045 and said they had my item, it was on a truck, out for delivery, and I should have it "in a couple of hours".

At 1811 tonight a large truck pulled up, and two big, burly guys unloaded it, carted it up the driveway, and plunked it down in the garage for me. They took a picture of it on their cellphone, and typed in a bunch of info. I asked one of them if they knew where it came from, and got "ummmm...Home Depot. The warehouse". So either HD sent another one out, this one made it's way back to the HD warehouse and was sent, or I guess it doesn't really matter. Kind of a First World problem, and nothing to blow a fuse over. 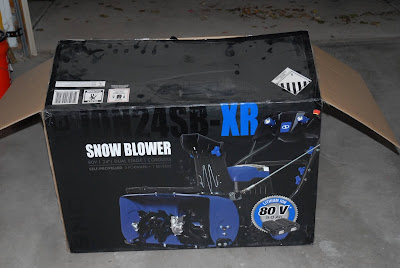 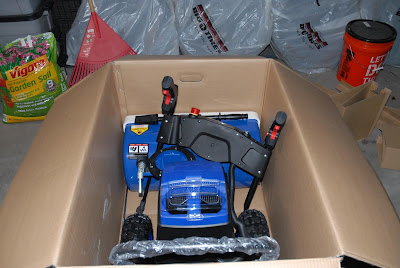 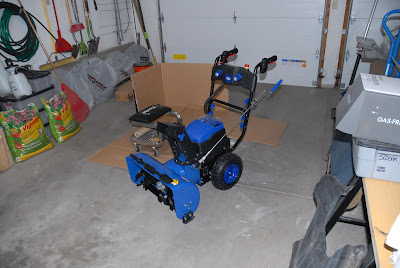 No missing hardware or parts, no tools flung through the air, and I had it together in about 30 minutes.

I charged the batteries when I was assembling it, and after about 4 hours they were charged, so I took it for a test drive around the garage.

There's not too much difference between speed #1 and #2, but I think #3 would be too fast to plow with. The controls work smoothly, and when you engage the drive, it has a "soft start", so it doesn't just jump to the speed it's set at.

It seems to be balanced nicely, too, as it's fairly easy to lift the auger portion of it up to glide over a bump, or move it some distance without the little outrigger skis dragging.

The only thing I'll have to get used to is that this thing is direct-drive, with a solid axle; no differential. That means both wheels are driven at the same speed, which makes turning a tight corner difficult.

So, we'll see how it goes the first time we get enough snow to need it. The operating manual claims 40 minutes of run time, and that should be enough for slow-poke me to clear the small amount we have.
at October 26, 2018