Well, we're finally at the stage where we have to start kid-proofing the house. He's not only curious, but he's gotten fast! He's way past just walking around, and when he decides he wants to get from Point A to Point B, he takes off at max thrust and can really cover ground fast for somebody with such short legs. 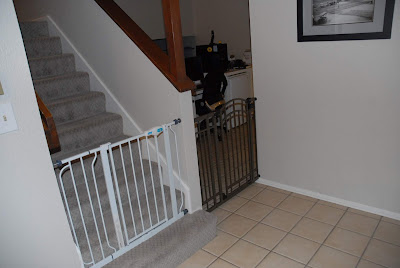 We bought the white gate about two months ago when he learned he could crawl up the steps, hang a left down the hallway, and skidaddle to his room where lots of his toys are kept.

The brown gate went up tonight when the Little Guy and his Daddy came over for dinner, and between cooking dinner and trying to keep an eye on him, it got a bit much.

See, without the brown gate, he can (attempt to) go down the stairs into the den! 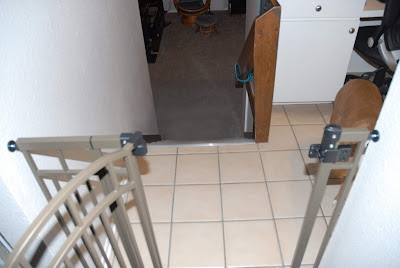 And while it's only five carpeted steps, he's at the stage where he's trying to walk down the stairs, rather than turn around and slide down them on his tummy, which he's very good at.

So between these two gates, and another wood one to block the kitchen/dining room door, we can keep him corralled in the living room/dining room area.

I'll be shopping/installing kid latches on all the kitchen and den cabinets this week, something I last did in 1987. He has very good Garage Discipline, as he doesn't touch or grab things like a lot of little kids do, and we've spent hours looking at tools, parts, and equipment, and learning their names. He did NINE laps of my wife's car Friday night, patting it fondly and saying "G'Ma", which is as close as he's come so far to saying "Grandma". And he's starting to say things that make sense. It's amazing to watch his speech develop. When he's playing with his toys he has 'conversations' with them. Occasionally you'll hear a distinguishable word or two, but mostly it's gibberish. The wondrous thing is that he has the cadence, inflection, and apparently the syntax down pat, and I swear I'm starting to understand him. Must be all those years of pulling signals out of the noise!
Posted by drjim at 8:21 PM