Probably not, but I wanted a catchy title.

After shooting myself in the foot with the paint on the spoiler, and guests coming, and rainstorms requiring my wife's car be garaged, it's been several weeks since I worked on the spoiler.

I've been busy finalizing stuff for the Radio Room furniture and antennas system, and generating a BOM for those projects, along with doing boring home-owner stuff, so at least I haven't been a layabout.

A week or two ago I finally said to Hades with it, and decided any remaining paint work can be done to the spoiler while it's bolted on the car. Now that the weather is nice again, and the wife's little car can sit outside, I set the saw horses back up, plopped the spoiler back up on them, and proceeded to cut/fit/fettle the rubber channel I'm using for a gasket. I also had to make three large, and four small, gaskets from the 3/32" neoprene sheet I bought. Since there are holes punched in all the gaskets cut from the sheet, I needed a tool to make nice, neat 6mm holes in the sheet. Harbor Freight provided several sets of "Hollow Hole Punches", and the 1/4" size is plenty close (.2500 vs .2362) to the 6mm studs that hold the spoiler on. 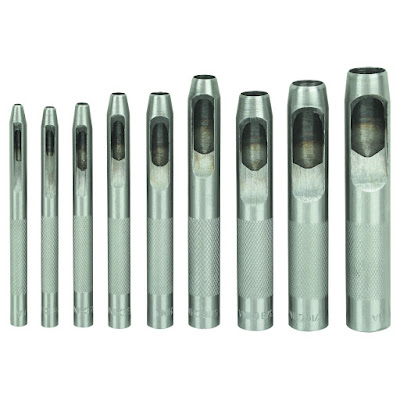 So, yesterday I laid out and cut the three pieces of 1/16" "U" channel neoprene that I need for the two gaskets. 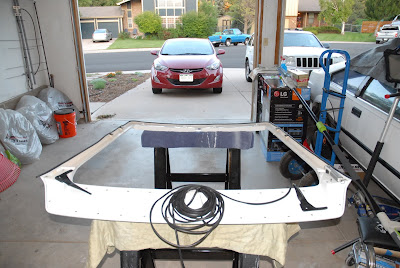 The two "L" shaped black objects are the OEM plastic gaskets for the lower corners of the spoiler.

Here's a better view of one. It doesn't fit very well any longer because....THIRTY-THREE years! The Kalifornia sun did some major damage the the "soft parts" on the car, like the rubber gaskets under the door locks, door handles, and the plastic cladding on the window trim. The door panels took a major hit along their tops, but that's another project that I'm researching.

It's not supposed to fit over the curved edge you see to it's right. One of the U-channel gaskets goes there, the inner one. The part that "sticks up" and looks like it should be an inch or two to the right actually sits on the glass. It also caused glass damage, but I'll relate what I did there later. 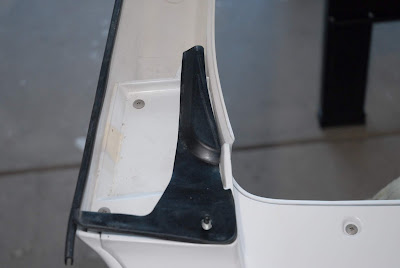 This is the replacement part from the repop kit I have, die-cut from some 1/16" sheet of "rubber", probably neoprene. 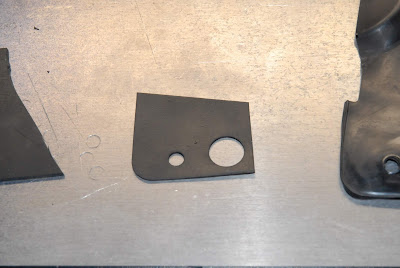 Uhhhh....yeah, it's just a TAD smaller than OEM! 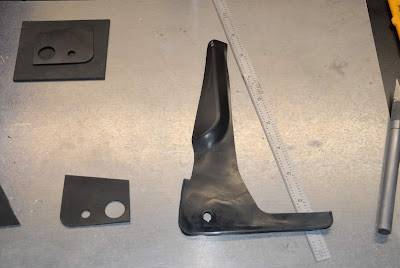 BUT.....from carefully observing how all these bits are connected, the only actual contact surface between the corner of the spoiler and the hatch is a small patch just about the same size as the reproduction kit provides. So it looks funny, but that little patch, along with the center mount patch, are the only 'load bearing' areas at the lower end.

This is the first center mount gasket I cut. It's just a little two ratty to use, as the outer edges will show between the spoiler and hatch. My cutting-to-an-outline skills and hole punching skills have improved vastly since I made this part the other night, so I'll just cut another one. 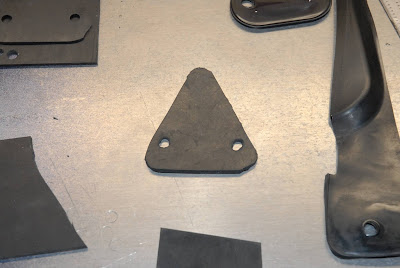 And here's the replacement on the right, "Punched and Peeled", which I'll explain is a minute. 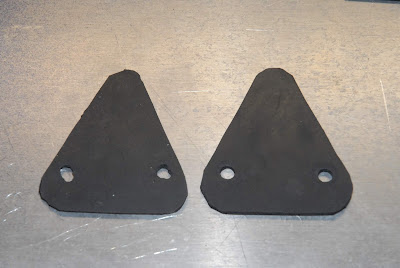 Once it's stuck on the center mount of the spoiler I can do some minor trimming.

One thing I found was that if you stick your template down to the sheet stock with some 3M #45 General Purpose spray adhesive, it stays stuck well enough that you can completely trim away the excess material.

Here's the two corner gaskets glued to the sheet stock and trimmed. 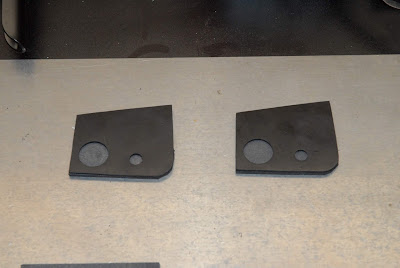 Then I take the 1/4" hole punch, line it up on the existing holes, and smack it will my ball peen hammer until the punch cuts through. Then I peel them apart, and I have a duplicate set of gaskets.

BTW....I can see no reason why the reproduction gaskets have that large hole in them. It doesn't line up with anything that would need clearance, so I didn't bother to punch it. 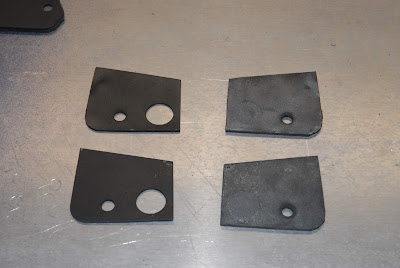 As you can see, it fits fine. 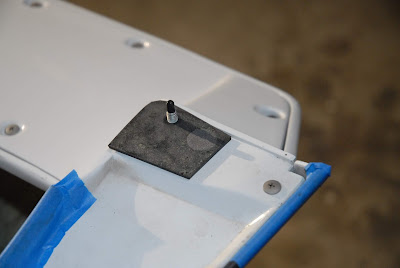 The four little rectangular gaskets I made were for the upper mounting studs where the spoiler secures to the hatch.


And I spent several hours today polishing the rear hatch glass. It had the worst water spots I've ever seen on glass. I first noticed them after I pulled the spoiler and was stunned at all the crud packed under there. I used a well-worn piece of 600 grit and lots of water to knock them down, but today I went at it with a vengeance. I cut a small foam sanding block in half, used some spray adhesive, and stuck a piece of 1500 grit wet-or-dry on it. I used a mixture of Zep window cleaner, a few ounces of denatured alcohol, and a couple of drops of dish soap for a lubricant.

After that I went over it with some super-ultra-mega fine Cerium Oxide glass polish to work out any scratches.

Then to finish up, I scrubbed in a coat of "Back to Black" on the rear window glass weather stripping.

I was able to get 90% of the water spots off the glass, and the few they were really stubborn are going to be under the spoiler where they can't be seen. The outer surface of the glass has never been cleaner, and it sparkles. 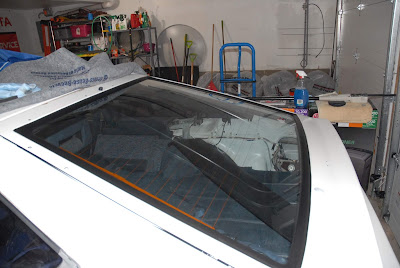 But now, looking out the back window, it's glaringly evident how absolutely filthy the inside of the glass is! The rear window was tinted at some earlier time, and the tinted film was removed some time after that. They did a horrible job cleaning the old adhesive from the film off the glass, and now there are dozens of splotches of old adhesive very firmly baked onto the inside surface of the glass. And you have to be very careful cleaning the glass because of the defroster grid, which I'd really like to keep functional.

And I finally decided I have to pull the hatch. The rust I can see up there is just way too much of an unknown. The spoiler can sit on the roof of the car on moving blankets while the hatch can go on the saw horses for a few days. I can do the jamb area inside the car first, and then tackle the hatch. I know exactly what to do to repair the jamb area, and even slow, old me can pop that out in a 24 hr period. The hatch will take a few days to clean, derust, treat, prime and paint just the upper leading edge, and then go back on the car.

More to come, and I'd really like to get the hatch finished before winter, even if it means driving the car very little.....
Posted by drjim at 10:35 PM