One of my wife's BFFs is coming out to visit, and since it's been so uncharacteristically HOT here lately, the wife decided we needed some air conditioning.

I was originally going to buy a pair of 10,000 BTU portable units. These are the kind that you vent outside through a flexible duct that attaches to a window adapter.

I saw the display at HD the other day when I was buying some (more...) 5/8" garden hoses. I had the model number and SKU on my clipboard, so I told the nice young guy who was ringing me up to add two of the A/C units, and then he helped me grab two (at 70lbs each, "grab" becomes relative), load them on the cart, and even put them in the Jeep for me.

Got them home, unloaded them, dragged one into the living room and unpacked it only to realize I hadn't checked the boxes we put on the cart, and I'd brought home two 8,000 BTU units.


While I went ahead and finished up installing it, she called the store, who said no problem getting it squared away if I brought back the receipts.

SO.......back to HD this morning to unravel the CF I caused. They took back the unopened one, credited me the price difference between what I'd been charged for vs what I took home, and then they went and got me a 10,200 BTU unit for the same price, as both of the ones I wanted originally had been sold.

So I've been fabricating adapter panels and installing portable A/C units all damn day. The Kids brought the little one over so they could hang out at the pool, and my weight-lifter stepson literally did all the Heavy Lifting getting the two A/C units up the stairs. He could probably taken one in each hand if he could have gotten a good grip on them!

So here's the Three Amigos sitting in the garage. 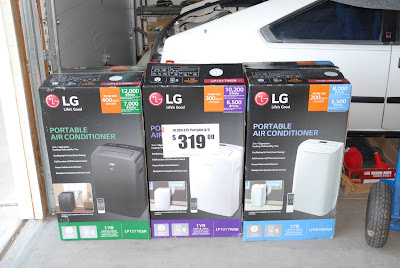 And the Big Bruiser in the living room. 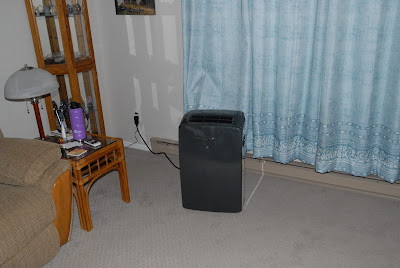 The 8,000 BTU unit went in the guest room, and has enough capacity to bring the room down to 70something.

The 10,200 BTU unit went into our bed room, and appears to be large enough to cool it adequately.

And the 12,000 BTU unit seems to cool the living room acceptably well.

One thing about A/C is that even though it can start blowing cold air immediately, everything else in the room is hot, and it takes a while to get this "Latent Heat" out of the furniture, carpets, walls, etc.

The two rooms upstairs are now 20* cooler than they were, which will definitely make sleeping much nicer.

So down to DIA tomorrow to pick up our guest for a week. There's some abandoned towns around here that we're thinking of heading out to see, and the wife has a nice little itinerary planned for the two of them.
Posted by drjim at 9:28 PM