I've always tried to learn some of the local history and geography of wherever it is that I'm currently living. In Dayes Of Olde, I'd get maps and charts of the area to learn where various highways and rivers were located, and then I learned how to refine that skill when I took ground school. Reading maritime charts is very similar, but also has notations of where Underwater Nasty Stuff is located so you don't run aground and/or tear the bottom out of your hull.

I was snake-fascinated when Google Earth came out, and nowadays I use Google Maps quite a bit.

Between Wikipedia, and Google Maps, you can plan some nice little trips to nearby places that are interesting.

Since I'd already pretty much run out of places I found "interesting" in SoCal in the 35 years I lived there, moving here was a welcome change of geography, with lots of new things to see, like Ghost Towns! So with that in mind, I picked a "Beginner's Object" and we drove up to Virginia Dale, the site of (supposedly) the "Last Complete Stage Station For The Overland Trail Stagecoach Line". 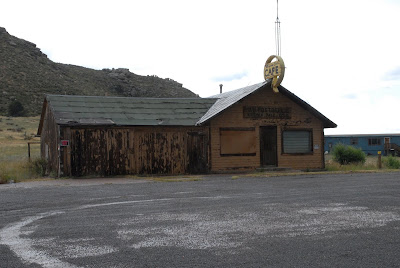 At the time the Wikipedia article was written/edited, the property was up for sale: 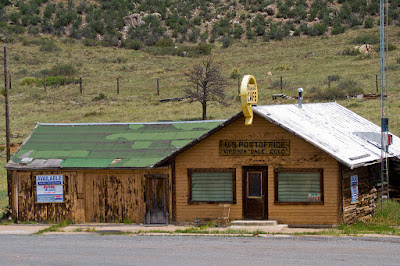 The buildings and road are now marked as Private, with plenty of KEEP OUT signs posted, so we stayed well away from the buildings out of respect for property rights.

The turnout on Highway 287 is quite wide there, and could easily accommodate several big rigs, so I parked at one edge while the girls looked around a bit. 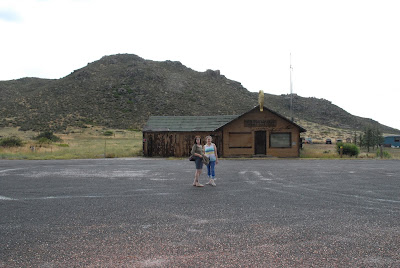 I wish this picture could capture the majesty of looking down this valley while the lightning flashed down from the storm clouds in the distance, but it can't. It was 85* in Fort Collins when we left, and we hit some good rain on the 287 North. By the time we got there, the outside air temp was down to 63*, a breeze was blowing in from the Northwest, it had just rained, and all you could smell were pine trees and wildflowers.

So besides lacking in visuals, the picture lacks the "being there" factor. 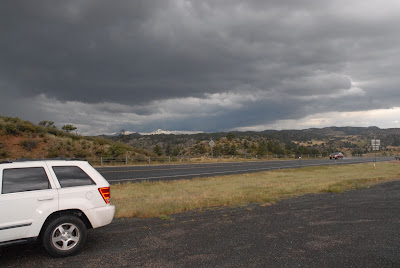 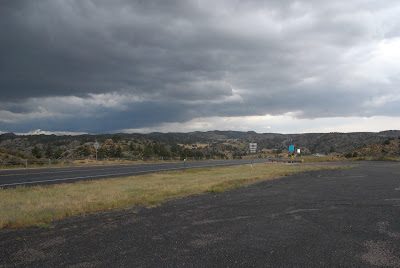 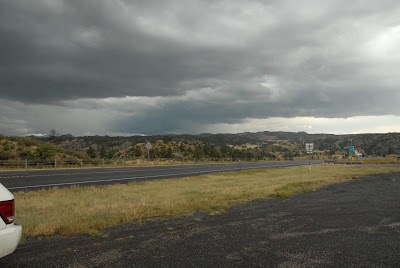 And a look back South, from whence we came. 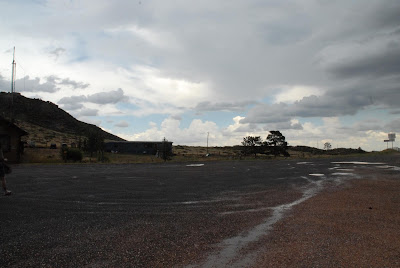 We looked around for this plaque, but couldn't find it. Turns out it's "A few hundred yards North" per the Wikipedia article, and we didn't walk that far North. 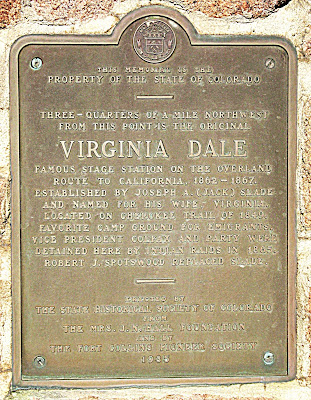 So Virginia Dale as a "Ghost Town" was kind of a bust, but at least the building is still there.

I found this website about ghost towns by state, and it has clickable maps of the counties in Colorado, along with a few pictures. Mostly you just find foundations, fireplaces, and the occasional run down looking building. Not quite what Hollyweird portrays them as, but then what is?

I've read there's a couple of old mining places near Laporte, and I think an abandoned saw mill, so I'm going to scout those out on the old Interwebz, and plan a better trip.

And I finally had a good chance to get a solid look at Goat Hill from the East side. 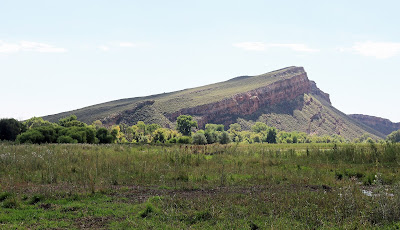 This is part of the Dakota Hogback that runs from just North of Cheyenne, all the way South to Northern New Mexico. The Cache La Poudre River runs along the base under the cliffs, and the the trout farm and Watson Lake, where we spent a pleasant Father's Day are also at the base of the cliffs.

What makes this a "Eureka" moment for me, is that the cliffs of this formation are what we saw every morning when we left the little apartment in Bellvue to go house hunting.

I took this picture the first couple of weeks we lived here, mostly to comment on the radio antennas.

Yup....those are the cliffs in the above picture, but seen from the West side of the Hogback. I had no idea there was a valley with a trout farm, lake, and river living down at the base.... 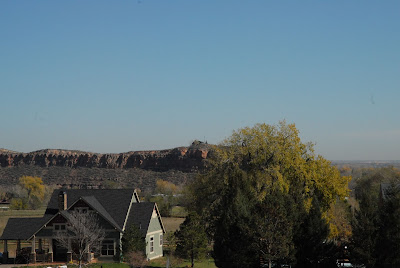 So even though the Virginia Dale visit was kind of a bust, we saw some beautiful scenery, got to witness a big thunderstorm come roaring in out of the hills, and had a nice drive.

And I got to connect some dots regarding local geology and geography. I get a big kick out of actually seeing some of the things I've been reading about.
Posted by drjim at 7:43 PM