And today I'm a statue.

I removed all the OEM air ducting on the Supra today to replace it with the Air Intake Tube I bought a couple of years ago. The story of this particular piece of kit is a tale of woe. It came from Canada, and somewhere along the way, it "broke open", the pipe disappeared, and it was taped back up, and sent on it's merry way.

It took the vendor and I SIX MONTHS to get it straightened out with the shipper, and I had to send everything I received to a special address where the shipper investigated it, admitted it had been stolen, and paid up.

In the mean time the vendor sent me this one, and it's been sitting on the shelf all this time. As part of the "5000' Elevation Adjustment Program" I'll be investigating ways to pick up a few "free" horsepower by making the engine breathe a bit better, and reducing Parasitic Drag.

So, after stripping off all the OEM air ducting and installing the new parts, I get this: 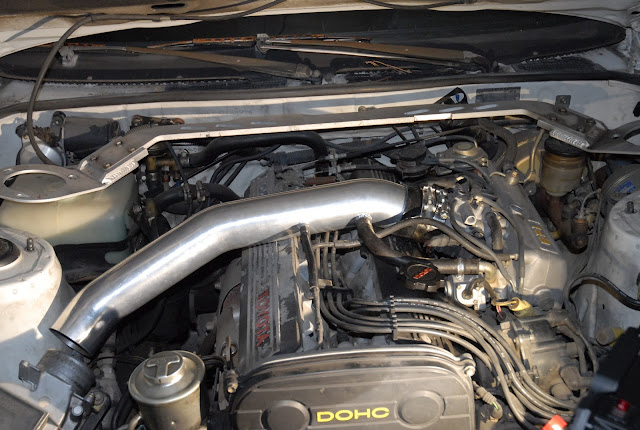 There are two "air taps" with hoses connected to them, so I keyed the position of the tube off where they connected to the OEM ducting. And notice I had to pull my strut tower brace to get even this far. 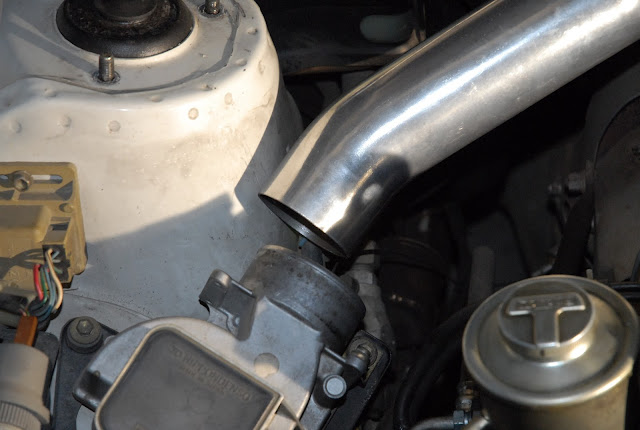 That's a 3" tube in the above picture, so to say they don't line up is being kind.

Pondering over this fitment issue during dinner, and remembering the vendor said he'd "get a kit right out so you don't have to wait", and our shared tale of woe in my even acquiring this item, I chuckled to myself and said "Gee....I wonder if they put the air fittings in the wrong place, and they thing is really meant to be flipped around".

Nawwwww...couldn't possibly be that simple, could it? 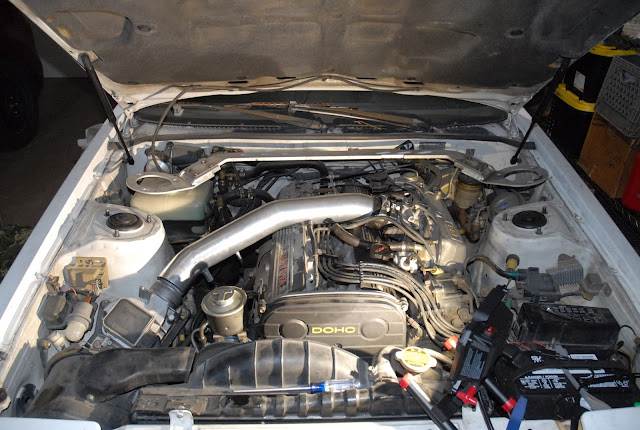 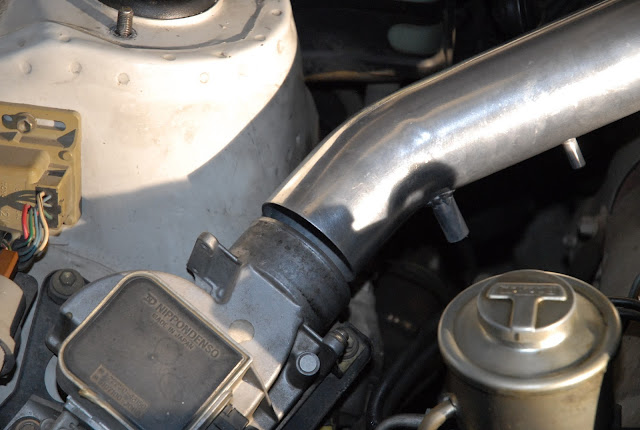 Considering the Air/Fuel Meter (the Nippondenso box) is loose, and the coupling on the other end is loose and sloppy, I'd say it fits pretty nicely when flipped around.

Sorry about those air tap fittings, though.......

And oh, man.....I really hate to contact the vendor about this. He bent over backwards to get me the first pipe out of the next batch that was being ceramic coated. And he's gone out of his way for me on other items, he's one of the few vendors to make anything for these cars, and he totally supports the car community. AFAIC, this is one of those "Let's Have A Few Beers Next Time", and I'll cut those fittings down, seal them up, and install the two fittings I have from when I was going to fab one of these from scratch.

My wife was wondering what I was having such a hoot about, and came out to the garage. I showed the "before" and "After" versions, and she said "You're taking this awfully well". Then I clued her in as to what this part was, and all the trouble it caused, and she said "OH NO.....That's the part you told me about? And now it doesn't fit? Because it was made wrong?".......

Yup. Call it irony, or Kar Karma, or what ever, I think it's hilarious because of the back story......

And I took about 50 detailed, well-lit photos of the engine compartment, the vacuum lines, electrical connections, the throttle and cruise control linkages, and some other details. I'll do the same when I start stripping the front of the engine down to replace the timing belt, tensioner and water pump. And I'll do the same when I strip down the intake side to replace the fuel injectors and give the throttle body and EGR passages a complete cleaning.

I was inspecting the hoses, and noticed one of the heater hoses is disconnected. That's NEVER a good sign, and usually indicates a bad heater core. I just checked Rock Auto, and they had ONE left in stock, so I ordered it. So far, none of the auto parts stores here have anything in stock for this car, compared to SoCal. Which I kinda knew in the back of my mind but never started appreciating until I got the car our here.

Swapping out the heater core in this cars is a Royal PITA. Most of the dash has to come out, at least as much as I had out when the car was apart before. And the destroyed carpet in the car, and the way it feels, leads me to believe that it was the heater core dumping coolant inside the car that ruined the carpet, and NOT the clutch master cylinder blowing out and dumping brake fluid inside. The carpet still has that sticky "antifreeze" feel, and from the area of the carper that was ruined, it would have taken more than the 5 or 6 Ozs of fluid in the clutch master.

Geez....and I wanted to drive the thing this summer!
Posted by drjim at 11:31 PM