Well, yesterdays attempt at pressure washing the bottom front of the Supra was a mixed success. My son brought over his "Task Force" pressure washer (the old house brand at Lowe's), and we proceeded to blast the underside of the car.

There were several problems from the get go.

One, his washer soap tanks have never worked, and two, we wound up having the seals blow out of the pump, putting us out of action.

The other "problem" was that the ZEP Industrial Strength (whatever that means these days) Purple cleaner I bought was not meant to be sprayed on and washed off (regardless of what the container says....), and it just runs off without having a chance to do much. Some of the people I talked to said it works quite well if you put it in the detergent tanks of the washer, but with our washer being non-functional in that area, that was a NOGO for us..

Then I ran out of good old Gunk Engine Brite, which does work extremely well if you spray it on, let it sit, and blast it off.

We got the loose stuff off fairly well: 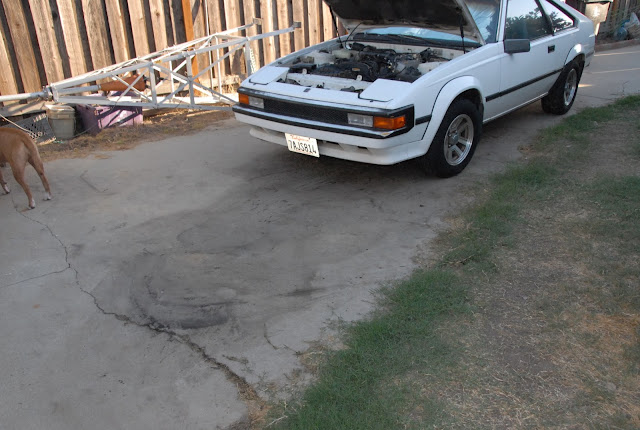 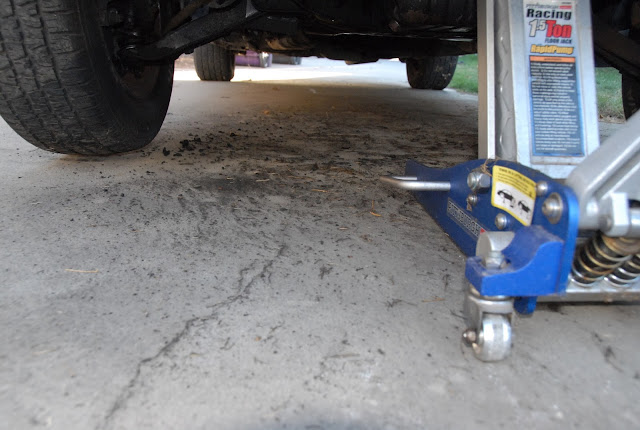 But the majority of the crud is still on the frame and suspension components, as you'll see in the following pix.

Found a small dent in the oil pan: 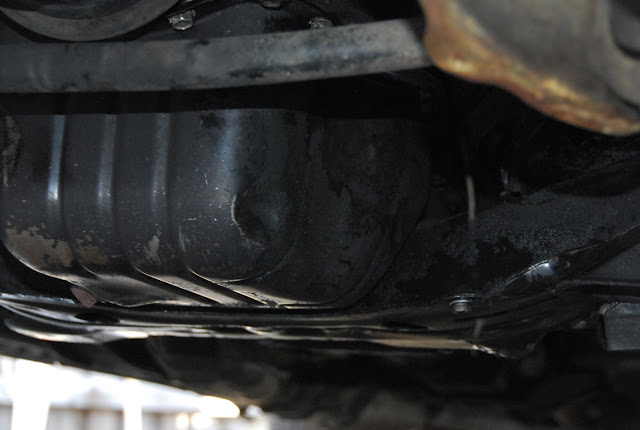 And a bent area of the front cross member, probably caused by somebody hitting one of those concrete parking lot bumpers: 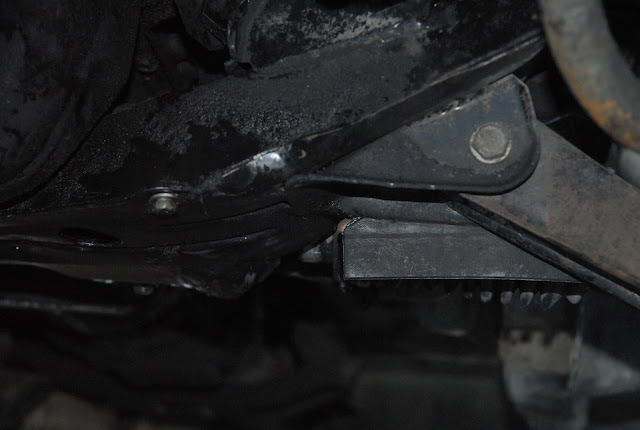 The oil pan dent is nothing to worry about, and likewise the ding in the cross member. The metal isn't split or folder back on itself, so I can just use a little "persuasion", and bend it back. 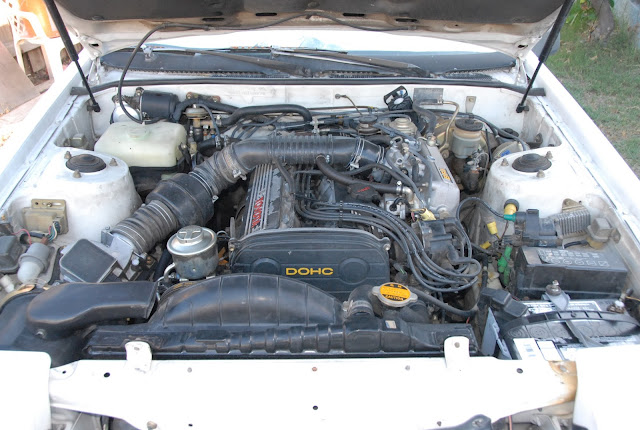 Which resulted in large chunks of the black wrinkle finish paint blowing off the cam covers: 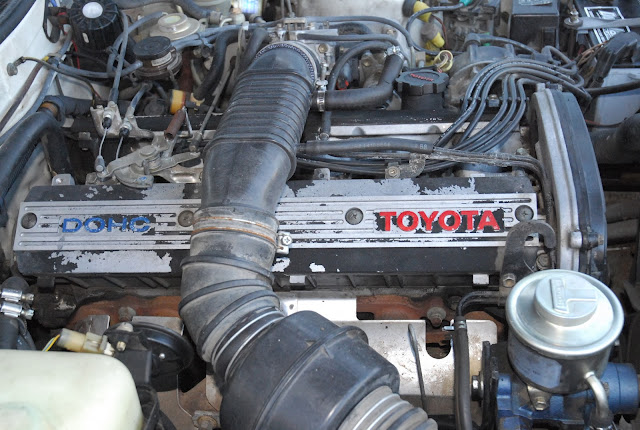 That's no big deal, as I have another set of cam covers that I'm going to get degreased, and finish them in the same colors. I'm not sure if I'm going to do it myself, or get them powder coated.


And I found out my power steering pump is blue, probably indicating a replacement at some time in the past: 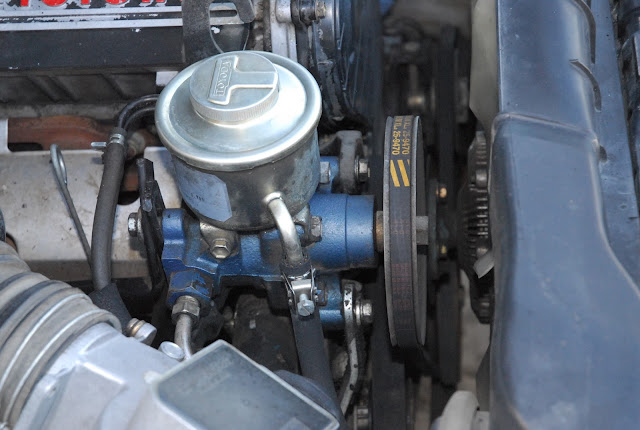 The only rust I found on the car is under the battery tray, which I knew was there from the topside: 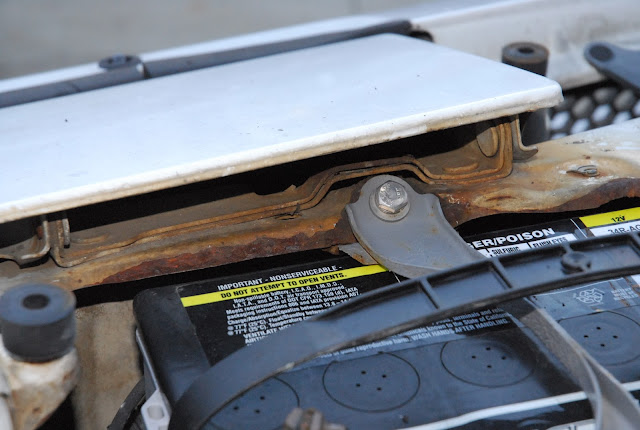 When I put the new battery in, I cleaned the tray with Naval Jelly, primed it and painted it, but blew off the upper area for "later".

After I finish degreasing the car and get it in the garage, I'll pull the battery, clean and rust encapsulate this area, and paint it.

This is the area at the very bottom of the car, under the battery tray, where the battery had been dripping for who knows how long: 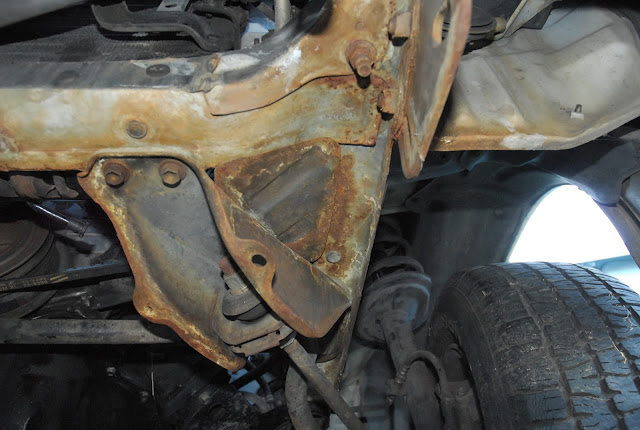 It's going to take some serious wire brushing and sanding to get the surface clean down there so I can encapsulate the rust and paint it.

And as usual, Pebbles was out there "Straw Bossing" us: 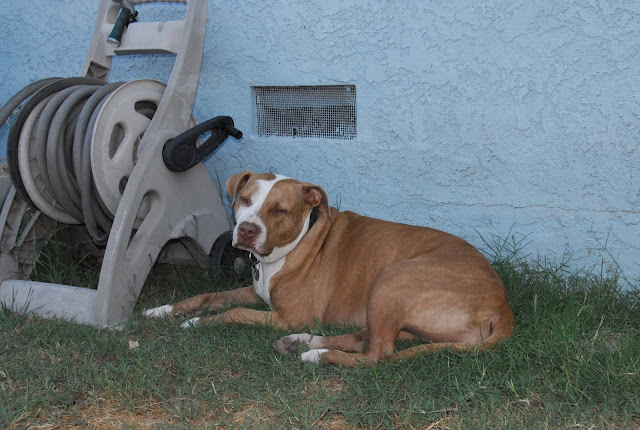 I'm not going for "show car" quality, and probably never will. This car has a nice "patina" to it (all the rage these days!), and since it's truly a "survivor" car, I figured it's earned every little nick, chip, and scrape.

Surface rust gets fixed. Nicks/chips through the paint get fixed. The bleached out cracked paint on the mirrors and rear sunshade are getting fixed, and the same with the front bumper. I have new carpets for the interior, and the seats will get properly cleaned when they're out for the carpet replacement.

I bought this car to drive, and I'm more concerned about getting the front and rear suspensions rebuilt, the brakes rebuilt, all the hoses and belts (including the timing belt, tensioner, and idler) replaced, the new wheels and tires on it, and a proper 4-wheel alignment.

The only thing I can't do "in house" is replacing the windshield, which has seen better days, so that will get vended out. It's not cracked, and hasn't delaminated that I can see, but the blue tinted area at the top has that "Old Jap Car" brown tint to it now, and it has a lot of little nicks and chips in it, any one of which could turn into a crack.

Plus, it just looks bad!


The pressure washer that I bought should be here Tuesday afternoon, and I bought some gel-type Gunk that hopefully will stick to the vertical surfaces and soften up the crud enough that the washer can blow it off.

And all the bending, stretching, and lugging stuff around is good for me, and gets me off my behind and moving more than the day or two per week I spend on the Iowa. I joked with my previous Doctor that I had joined the "Toyota Physical Fitness Plan", and after I explained it to him, he said that was good way to look at it.

I just hope Part 2 goes better, and I can get all the grease, crud, and other gunk off the bottom of the car!