She heard some other dogs barking, ran to the back door, and started whining, something she rarely does.

Then I heard my wife say "Oh my GOD!!" in a rather frantic voice, so I grabbed my 1911 and headed for the back.

We had a visitor on the backyard block wall! 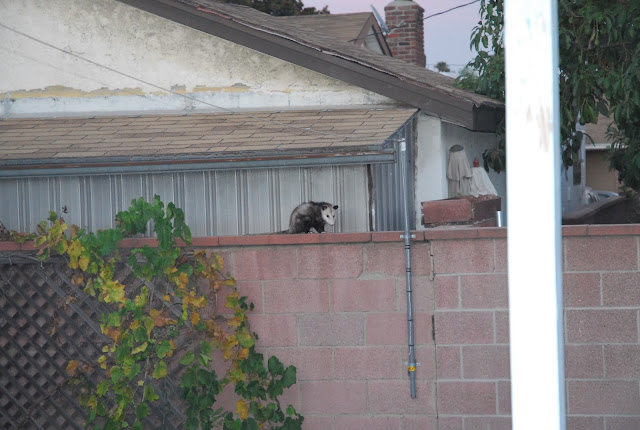 By this time Pebbles had bolted out the door when my wife cracked it open, and by the time I got out there she was doing her best to dislodge the intruder from the wall: 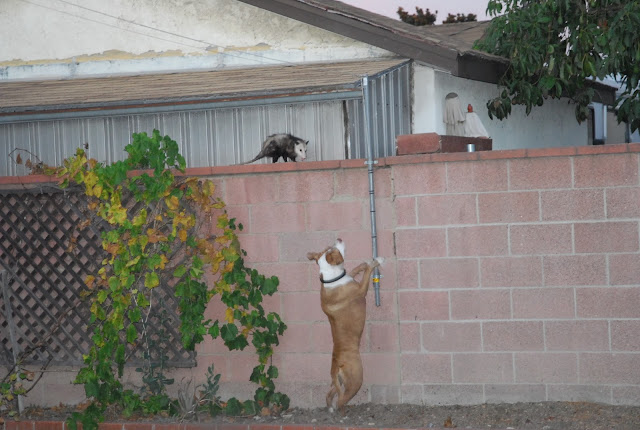 This was when she was on her way UP!

Her front paws got to within a few inches of the top of the wall, so I decided I'd better end the fracas, as I didn't want a 1930 emergency call to the Vet.

I went over there, and barked out our "safe" word, and she stopped and sat down, so all those HOURS of practicing that command paid off.

I got her back inside and praised her for being "safe" (DO NOT use the word when doing this!), and gave her one of her favorite treats.

Part of the grapevine is on the ground, and not the trellis, as she tried to climb the trellis a few nights ago in response to "something" being up on the wall.

It's usually a cat, but they take off after she makes one pass at them, and the other night she repeatedly kept trying to get up the wall in that area, so now I think I know what got her so riled up!

The possum was starting to get a bit defensive by the time I got to the fence, but I don't think it's their nature to attack, so the only thing I was worried about was if it fell off the wall.

Hopefully the little critter won't be back tonight........