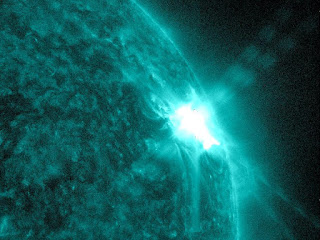 This whole current flap about the Coronal Mass Ejection that happened earlier this week is a big ZERO.
We've had MUCH larger Solar Flares and CME's in the last several years, and there's been little to NO damage on the Earth.
The satellite operators have far more to worry about, but even they haven't seen anything from this one.
The fact NOAA and NASA can't agree on how big/damaging this one is/was/MIGHT be should tell you something.
Personally, I tend to favor NOAA, as they've always had a better grip on Space Weather than NASA.
The lead-in picture is from an M7.9 solar flare that occurred on 24 March 2012, and the bottom picture is from today, 14 July 2012, at 19:16 UTC. 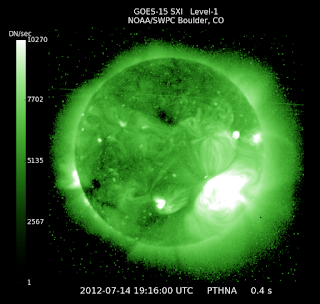