Too Much Work, But a Bit of Fun Today 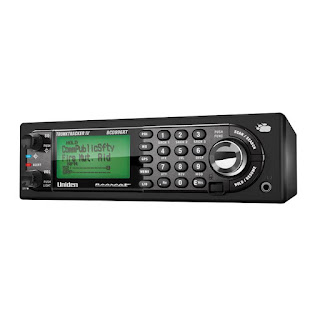 I'll be headed out on another launch campaign next Sunday, and since I've been working 10~11 hour days, I haven't been posting much.
We finished our RF System checkouts early today, and since the Meteorologist was MIA, I blew off helping him do the Weather System checkouts (DUH! He wasn't even on the ship!), and headed for home.
I stopped in at my mailbox, and picked up a new Uniden BCD996XT scanner that I ordered the other day. Now, the Uniden BD796D scanner I have here in Radio Central is still perfectly serviceable, and the little Uniden Home Patrol that's out in the living room is a marvel, but my son mentioned the other day he'd like to put a scanner in his car, and since his birthday is coming up in a couple of months, I figured this would be an ideal "excuse" for me to get his present early.
Gee, I have to know how it works, and how to program it if I'm going to support it, don't I?
Now while Uniden includes some "free" software to program these, and there are some other free programs out there that can do it, I'm very partial towards using BuTel software to program these. The really cool thing about the BuTel software, is that if you have a subscription to the RadioReference website, the software will automatically connect, and sort out the frequencies, control channels, Talk Group ID's, and all the other things you need to know about a Trunked Radio System from the online databases Radio Reference maintains, and presents them in a very logical, READABLE manner so you can decide what to save to a local database, which you then upload to the scanner.
Sure beats buying a handful of crystals every time you want to change frequencies!
This all started the other day when he and I were talking some radio stuff, and he told me what systems he wanted to be able to listen to. Some of the things he wanted are on a "conventional" radio system, but the others are on a trunked system, which pretty much killed the chances of him being able to use one of my older scanners.
ANYWAY.....the BCD996XT is quite a capable receiver. You can plug a GPS into it, and as you change areas, it will change what systems it's receiving on-the-fly.
I haven't really begun to scratch the surface of this radio,but I'm sure by the time his birthday gets here I'll have it pretty well sorted out.
Gee....I might even have to buy him a new one, as this one will probably be worn out by then!
.
at July 28, 2012