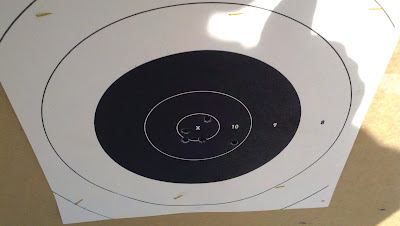 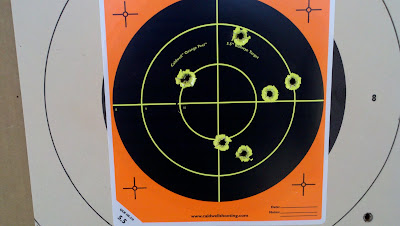 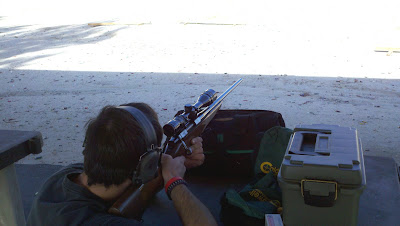 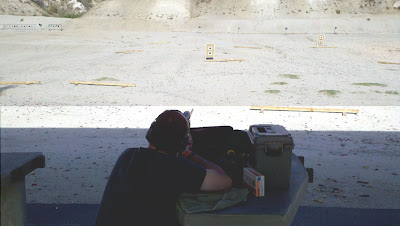 Always good to spend some time at the range!
We had a ball today shooting my Marlin 336/30-30, my son's Savage 17HMR, my "Zombie Zapper MkI", and my son's step-dad's Browning 300 Winchester Magnum.
We also went through about 50 rounds each with our pistols, but that's not why we went.
I finally have a decent bench rest, so I was able to check the zero on my Marlin. Turns out I had it just about spot-on! The picture of the black target was from the first few rounds I fired at 50 yards, and I was pretty happy with it. The picture of the "Shoot-N-See" target was what I fired at 100 yards. I would have liked a closer grouping, but this was around 2pm, and the wind was blowing cross-range pretty hard, about 10~15MPH according to one of the guys there who had a little anemometer. He was shooting a 22-250, and complaining how he was "all over the place" at 100 yards. I looked at his target, and he had around 10 shot is a 2~2-1/2" group! And for the first time, I was also able to hit the steel targets 100% of the time. I think they're about 10" in diameter, and they were at 102 yards, according to my little Bushnell laser rangefinder.
Then we broke out the Browning in 300 Win Mag.
BOOM! It's got quite a kick to it, and my son was right; it just isn't much fun to shoot more than 3 rounds through it. His step-dad has it dialed in at 100 yards (quite a waste), and I was able to hit the 9 ring consistently. It's a beautiful rifle, with a humongous (to me, anyway) Tasco scope on it. I've always heard "Tasco is junk", but it has a beautiful, crisp, clear image, and handles the pounding it gets from the rifle just fine. I don't know how well it would hold up out on a hunt in rough country and bad weather year-after-year, but it seems like a nice scope to me.
As far as my Remington 1100 with the rifled barrel, I was really disappointed with the little Simmons scope I had on it. The images just didn't seem "right", and I felt I would have done much better with ghost-ring sights on it. Really disappointing. We picked up my new Nikon scope on the way back from the range, so after I clean the 1100, I'll put the new scope on it, and we'll head back to the range next month.
The inexpensive slug rounds I bought were quite nice to shoot, and as the first one ejected I was amazed at how light the recoil was. I figured it was the Lead Sled absorbing most of the recoil, so after firing a few more of those, and getting nowhere fast with the Simmons scope, I stepped up to one of the 325 grain, 1800fps Winchester slugs I got the other night.
HOLY SMOKES!
It roared like a Naval 3-pounder, and knocked the Lead Sled back about 6"!
People turned around and looked every time I fired it. I was missing the steel at 100 yards, but sure raising a huge cloud of dust out of the berm behind the steel!
And then I found out what was going on with the Simmons scope.....
As we were packing up to leave, one of the range officers came over and looked at it. He asked how well I could see with the scope, and I replied not very well, and I wasn't happy at all with it. Then he said "You've got it mounted BACKWARDS. Didn't you notice the image was smaller than one-to-one?".
OOOPS.....
DOH!
This little scope has one big lens, and one small lens. I thought the big lens went in the front (gathers more light, you know), and the small lens was the one for your eye.
I don't think I've ever been this embarrassed over something shooting related.
Still, we had a great time, the weather was beautiful, except for the wind, and we met some very nice fellow shooters today.

My son sent me the video he took with his iPhone.