Well, I kinda blew it last night when I said it looked like most of the storm would miss us. SLW and I had a nice fire going, and watched the original version of "Ocean's 11" last night, and I stayed up a bit longer doing the "Storm Watch" thing. I went to bed about 0100, and it was snowing, but not very heavy. I got up once around 0400, looked out the window, and it was really coming down.

Our maple, crab apple, and ash tree have all lost limbs, and the ash tree dropped a YUGE one, bashing a gutter on it's way down. It landed on the support rope for the wire antenna, and tore the end support mast out of the fence post on the South end. I'd only used 1" "Lath Screws" and some conduit hangers to mount the mast to the post, and they acted like a "mechanical fuse" when the limb hit the rope. Hopefully we don't have any roof damage. The limb is well clear of the chimney, so we can still use the fireplace. 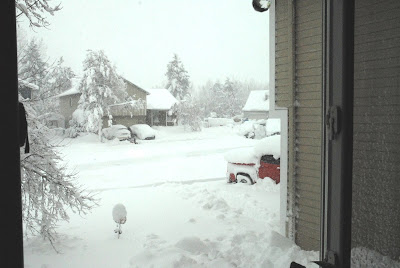 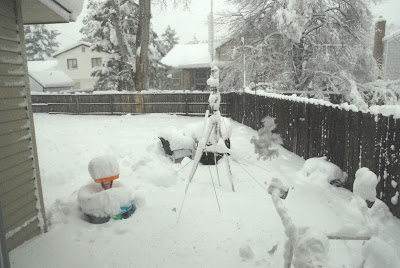 View from sun room. You can see the wire antenna running diagonally through the picture, and the two limbs that broke off the ash tree: 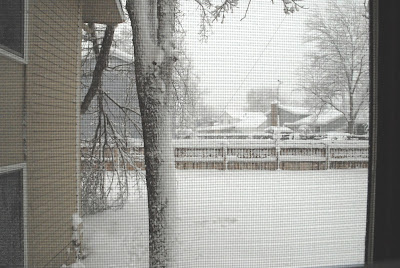 From the laundry room: 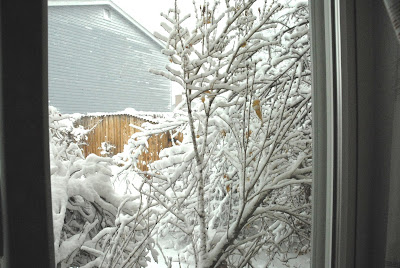 And the view from the side door on the garage. Notice the neighbor's snowblower for reference. It's a full-size, 24" width model: 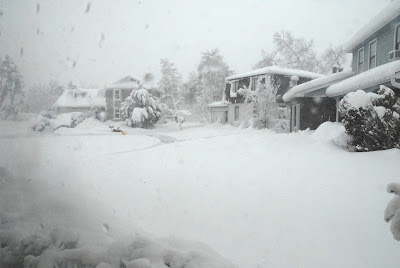 And the NWS is predicting another 8"~10" of snowfall before this passes through, and they've declared a "Blizzard Warning" for this area. Some of the agencies I monitor on the scanner are declaring white-out conditions across wide areas.

The Kids up in Laporte are without power, but fortunately the house has gas for heating and cooking. The local radio station, KRFC, is off-the-air, along with KMAX, 94.3, but they're both still streaming online.

The in-laws up at the homestead have something like 48" of snow, and it's still coming down hard. They're not planning on going anywhere for a few days. The other in-laws in Cheyenne are getting hammered, but he reports his new snowblower is working just fine. And the other in-laws on "The Ranch" have heavy equipment, and know how to use it, so they'll be fine, too. No, Beans, I still haven't bought a replacement yet. I'll start seriously looking on nextdoor.com and craigslist in April. I would have bought the lightly-used Honda last year, but it would have been a PITA to get it home in my Jeep.

Now I have a truck, and will sally forth in search of a good, used snowblower in the near future.