Pretty Much Dug Out

And my little truck thanks me! 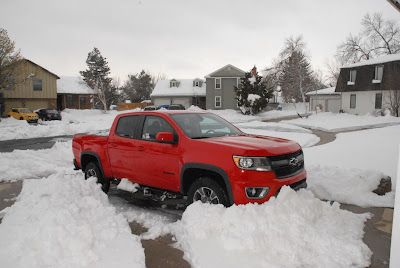 Quite a difference from yesterday: 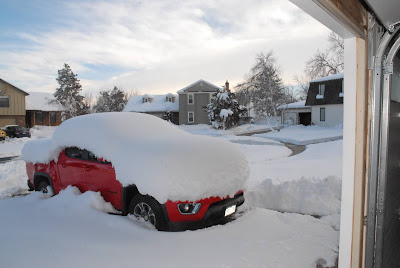 I shoveled two paths to it, knocked the snow off, and then shoveled the paths again and put down a bunch of ice melt and sand. My new snow boots got a good workout, and my feet stayed toasty warm. Took me three times in 4-HI to punch my way out into the street. I probably could have done it in two, but the first attempt wound up with spinning tires, so I went back up the driveway, and then bashed into the snow again. The third time I hit the snow it powered right through to the cleared lane, and off I went. Took a drive around the neighborhood to survey the damage, and yowie, we've got everything from small branches, to 6" diameter limbs, to whole trees broken in half and laying on the sidewalks, streets and roofs. I think the tree service people are going to be pretty busy the next few weeks.

The city ran a road grader down the cul-de-sac this morning about 0330, and luckily the blade was angled away from our side of the street. The people directly across the street had spent several hours yesterday clearing their drive way, and clearing a path to the lanes the Snowblower Guy cleared. This morning they had a three foot berm of snow blocking their driveway. This only the second time the city has sent anything down our cul-de-sac, and since Snowblower Guy had cleared a very serviceable path, he really didn't have to come down our street at all.

Have to take SLW down to the airport Wednesday afternoon, so I'm hoping the roads will be clear, and the trip uneventful.