Cloudy Day, But No Smoke

We had a light dusting of snow last night. It was the kind that doesn't come down in flakes, but rather itty-bitty snowballs. The reports from the fire areas indicate they received a couple of inches, which will definitely help.

There's a front coming through tomorrow night, and it's packing some moisture. Last night we had a forecast 50%~80% chance of rain and snow, with possibly an inch of accumulation.

This afternoon the NWS upped the ante quite a bit, calling for an 80%~90% chance of precipitation, but now predicting three to seven inches of accumulation on Sunday.....

Oh, boy.....and I don't have my new snowblower yet! Coulda-Shoulda-Woulda strikes again.

But the USPS delivered all the new electrolytic capacitors for the Heathkit receiver and transmitter, so I'll be able to hang out in the basement and get started on the recommissioning of those two radios. 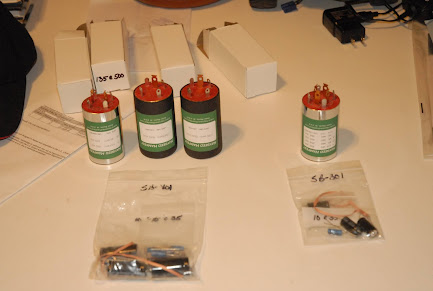 The set on the left are for the transmitter, and the ones on the right are for the receiver, which I'll do first. When I rebuilt my SB-310 "Shortwave" version of this receiver I think I had about ten hours in it, including replacing the rectifiers in the power supply (3 diodes) and doing a complete alignment on it. This one might take a bit longer as I have some cleaning to do on it, and you never know what you might find when you pull it out of the case and look at the bottom of the chassis.

The four big "Can Capacitors" are new manufacture, made here in the USA in Cedar Rapids, IA, and have higher rated voltages and slightly increased capacitance due to their construction from more modern materials. The smaller capacitors in the bags are also new manufacture, and readily available. The only reason I bought the complete "kits" from the people who make and sell the big cans was just to make it a one-stop transaction.

I'll do a tube inventory of my tube stock and the transmitter, and see what other tubes I need to order besides the 0A2 Voltage Regulator Tube, which I'm 99% sure I don't have. Some of the tubes are common to the receiver, and are used in my Drake and Hallicrafters radios, so I should be well-stocked on those. The 6BZ6 was even used in the radios I worked on while on the Iowa.

I'll rearrange the station desk here in the sunroom so I can use the riser I have to hold another set of radios. It'll be my "Operational Boat Anchor" station, and I'll be able to rotate between the Heathkit, Drake, and Hallicrafters rigs I have.