Sweet Little Wife has been talking lately about us "needing" a truck. She can't really haul much besides me, groceries, and The Little Guy around in her beloved little Hyundai Elantra, and with her recent furniture refinishing and gardening projects, she really does need to haul some stuff around.

And there have been numerous times when I needed things that were too big to fit in my Grand Cherokee, which has less space inside than you'd think by looking at the outside.

She also said it MUST have four doors (a.k.a. "Crew Cab" configuration) as she likes being able to take more than one person somewhere, i.e. The Little Guy and one or both of The Kids. Hmmm....guess I get to ride in the bed, then.....

And it MUST be four wheel (these days "All Wheel") drive, AND be capable of getting up to the The Homestead of our extended family, something she says she would NOT attempt in the little Hyundai, and I don't blame her one bit, having driven up there numerous times.

So I mentioned something about the new Jeep Gladiator being a four-door, all-wheel drive, "Trail Rated" vehicle with a pick-up bed, and just let it fade out after that.

We went running around doing some errands this afternoon (Home Depot, CVS, etc) and went to Freddy's for dinner. I *finally* got my Patty Melt from Freddy's and it was fabulous! She mentioned how nice it would be if we had a "nice little truck" to run all out errands in as she looked at how packed we had my Grand Cherokee.

I said we'd drive by the Jeep dealer tonight on the way home, and see if they had any Gladiators in stock.

They only had two, one pretty basic, and one pretty loaded. We looked at the "pretty loaded" one, and except for the color (black), she loved it. She absolutely detested in in black, though, saying "It Looks Like a Gestapo Car", which really cracked up the sales guy.

So we came home, went online, and did the "Build and Price" thing, and looked up the resale value of my Jeep.

Current delivery time is running about 8 weeks for a special order car, and if we're gonna cough up the Ka-Ching for one, we're going to get exactly what we want, so unless they put $10k "On The Hood", we're loathe (well, *I* am) to buy one out of stock.

I'm gobsmacked she's considering this. She even says I can get it with the six-speed manual trans. She knows how to drive a manual trans car, but I'm not so sure she'll like driving one of these with a manual, and that's the last point we have to discuss, as an automatic transmission is a $2,000 option.

Other than, should we get RED, or White? 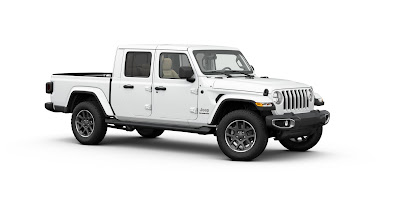