Meanwhile, Back In The World

NWS said "up to 1/2" of new accumulation", but we've gotten several inches of pretty, white, fluffy stuff, and it's still coming down lightly. But it's predicted for the middle 30's tomorrow, and 50-plus on Friday and Saturday, so the new stuff won't be here very long.

And the windshield in the Jeep finally gave up the ghost and split almost completely from side-to-side a couple of inches below that massive rock hit it took a few months ago on the way back from DIA. I'll have to shop around some auto glass places here, but I'm tempted to go with Safelite. The guy across the street had them come out and replace the windshield in his big Ford pick-up, and they were her, done, and gone in under an hour. This time of year it might require a trip to their nice HEATED shop to get it done.

And since every little boy needs some Green Army Men in his life, I procured a small unit for him to train with. 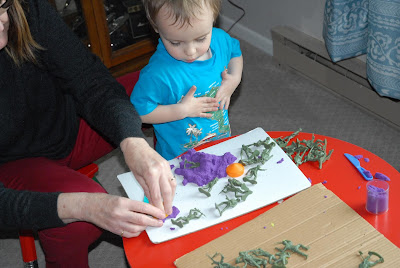 I asked him why he "buried" the soldier (see green legs protruding from purple sand...), and it took him a while to get it it out, but then he said "He's a SNIPER!".

I have no idea who taught him that. Really....I don't ever recall even saying the word "sniper" around him. 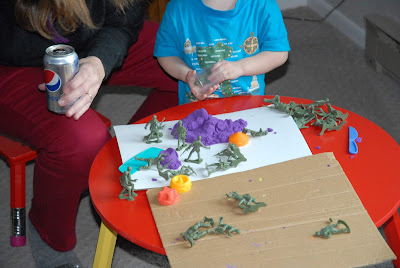 I can see some mechanized units in his future.....or at least a bigger AO.....probably both!

And I missed the return call from the Doctor's office, and when I called back, she and her Nurse were out-of-the-office after lunch today, but the staff told me they WILL call back tomorrow.