Was 99% what I expected it to be. Get checked in, change into some scrubs, lay down on the table, get the "Radio Frequency Coil Assembly" (30~50MHz) strapped on, and  the get inserted into the maws of The Mighty MAGNETOM! 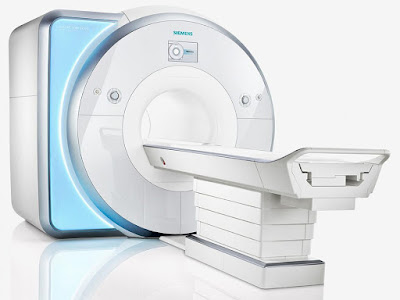 I had foam earplugs in, a big rubber bulb "Panic Button", and a "Pneumatic" headset on to listen to music while the big machine cranked through it's routine. The headset was similar to what I'd seen on commercial airliners years ago, where a little "speaker" in the armrest was sealed to a plastic port that your "headphones" plugged into. The "headphones" were just plastic tubing that carried the sound from the armrest mounted speaker to your ears. Very clever, lightweight, and CHEAP. And they consist of nothing conductive, or magnetic, and important consideration when the person wearing them is enclosed by a very powerful, pulsed magnetic field. No long run of wire that could get a voltage induced in it. Same with the squeeze-bulb Panic Button.

I didn't think it was all that loud, but then my hearing is shot, I knew what it was doing, and loud "industrial" noises like that don't usually faze me. And seeing as both ends are open, I don't get the "claustrophobic" part of it, but I guess it could be pretty intimidating.

The worst part? It was cold in the room, followed by what they called "Classic Rock" in my music selection wasn't what I'd call Classic Rock. Yeah, I know, a real "First World" problem. The Tech who ran the test gave me a heated blanket, better than 1st class on an overseas flight, and that kept me nice and snug.

Now in a Past Life, I was a Components Engineer for a company called "Searle Diagnostics", formerly "Nuclear Chicago", and they produced Radiological Imaging Units (aka "Gamma Cameras"), and Radiological Immunoassay Units for what used to be called "Nuclear Chemistry" back in the day. And one of our departments was building their first "CAT Scanner", a soon-to-be product line.

Alas for them, they hit some development snags, GE was first-to-market, and the project folded. Searle wound up selling that operation lock-stock-and-barrel to Siemens, who rechristened it "Siemens Gammasonics", the new name indicating they were now into Ultrasound as well as staying in the Nuclear Medicine business.

Where's this going? The mighty MAGNETOM was made by Siemens, and would be the great-great-great-grandchild of the things I watched being built for the first time.

It's kind of like being a Technician for Marconi, and living long enough to see communications satellites in daily use for mundane things.

Or going from points-and-coil ignition and carburetors to  electronic sequential fuel injection and coil-on-plug ignition.