Moving Day(s) for Our Neighbor

This actually goes back a couple of weeks ago. We noticed the Pouder Fire Authority truck across the street, and wonder what was going on. 15 minutes or so later, the Paramedics pull up in an Ambulance, and disappear inside. Some time after that, they open the garage door, move a car out of the garage, and back the ambulance up to the garage door. Sometime after that we see them loading a gurney, closing up the ambulance, and motoring away no lights, no siren.

In my limited experience, any time the medical personnel just gently motor away, it's not usually a Good Thing, so we feared the worst, that dear old guy who lived there with his wife had passed away.

Since he wasn't otherwise injured, it wound up being a "transport" run, so no lights and siren, or if they lit up, it was out of our sleepy little area.

Well, the family gathered and decided it wasn't the best thing for them to be living in a three-story house, so they're moving into a "Over 65" retirement community with all one-level facilities.

The house will be going up for sale soon, and the family is getting it cleaned out. 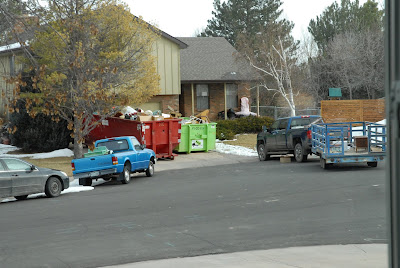 They were like ants on a candy bar, streaming in and out of the house with items, tossing them in the dumpster, and streaming back into the house.

My SLW was greatly saddened by all this, saying "They're getting rid of their whole lives", which brought sadness to me, too.

This house, and the neighbor's houses on each side of us, are still occupied by their original owners, having been purchased new in 1977 when this subdivision was built.

The house immediately to the left of this is is also empty, the absentee landlord deciding he didn't want to renew the lease with his renters. The people who were in it bought a house about a block and a half away, so we still see them, and we don't know if the house will be sold, or rented again. I think the tenants said he wanted to sell, but wasn't open to offers from them.

Spring is still a couple of months away, and I think it will bring some changes here to our little corner of town.
at February 24, 2020