Well now that the "SnowJoe" snow blower has thawed and dried out, I put the batteries in it to see if I could get a handle on the thumping noise, and the "Coffee Can Full Of Gravel" noise it was making.

It powered right up, and rattly-buzzy-bad-bearings noise was gone, and the thumping noise was extremely subdued.

I'm putting the gravel-in-a-can sound down to it having a bunch of gravel/stones/frozen mulch stuck in it's craw, but I haven't fully diagnosed the thumping noise yet.

The auger assembly consists of two sets of augers on a common shaft driven by a right-angle gearbox. The augers kind of "float" on the driveshaft, and have two "shear pins" each, consisting of a soft 1/4-20 (or a Metric bolt that size) bolt that shears if the auger gets jammed. Pretty standard stuff, and I wonder if the bolts have started to shear from the workout it got two days running.

ANYWAY....since this thing handles wet snow so poorly, and was taxed to the max dealing with 20" of snow, I'm throwing in the towel on it, and getting a gas-powered snow blower to replace it.

I'll either dump it on craigslist, or more likely strip the motors, electronics, and other useful stuff from it and scrap the rest. I'm thinking go-kart for the kids, or maybe buy a used Power Wheels riding toy and "upgrade" it a bit.

So what do we get for a replacement snow blower? I've got two thumbs up from Reverend Paul on an Ariens model, and they get great reviews on-line. Talking with the menfolk of the clan at our Thanksgiving gathering, I found that they don't have much experience with "little" snow blowers, but they agreed Ariens is a very good brand. They also liked Honda, and Toro. Anything Honda with an internal combustion engine in it rates very high on my list, but YIKES! A 24" Honda goes for $2,200, while the Ariens goes for about $1,100.

The other night, Well Seasoned Fool suggested I look on craigslist, which I did. 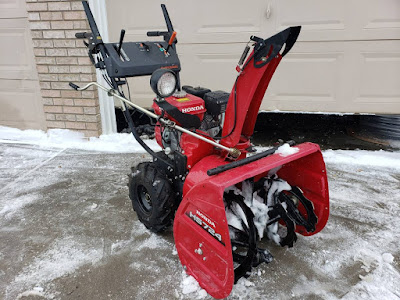 And the ad was well written by what appears to be an intelligent person, sometimes a rarity on craigslist.

Looking for a heavy duty snowblower with lots of options and quality construction? Then it’s time to introduce yourself to the Honda HS724.
This snow blower is just the type of machine that will handle the type of snow fort collins just found itself in!
Don't compare these to the machines you see parked outside the big box stores. These are expensive high end machines new! Check out Honda's website and see for yourself! This was over 2000 new!
I Don't need to sell, not in hurry to sell! PRICE IS FIRM.
It has a 24 inch clearing path and a 7hp Genuine Honda OHV engine.
This has more power than residential machines rated at almost twice as much! Full commercial grade!
This features Honda GX series engine that is the workhorse of a ton of different honda products!
The Hydrostatic drive system is similar to that of a lawn tractor. The reason these are so superior is that the hydrostatic offers the user infinite speed adjustment for the self propel. There are no set speeds that limit your options. The build quality is top notch!
Comes with a working headlight so you can see the path in front of you no matter the hour.
It fires up and runs GREAT!
Tires are like new.

I'm leaning towards the Honda.