Ok, so I finally got off-the-dime, went and bought nice set of mixing bowls and a few other kitchen items we'd either lost or tossed during our CALEXIT, and got down to making some bread.

I looked around on the Interwebz, asked some questions, and got a basic heading to go. Thank you all who helped get me started!

And me being me (damn Engineers) I had to learn the "Science" of bread. One thing I learned was about flour. To me, "Flour" always came out of a white "Gold Medal" bag like Mom used when she baked. I kinda-sorta knew there were different types of "Flour", but never knew what the critical differences were, and their intended uses. Turns out to make good bread, you should use "Bread Flour" vs "All Purpose" or "Self Rising" flour. The key is in the protein/gluten content, with "Bread Flour" having the highest concentration, making it most suitable for bread.

And since I loves me some rye bread, I learned about rye bread. Rye flour doesn't have the high gluten content, making for a denser bread that doesn't rise as much. So we don't use 100% rye flour, but rather a mix of white Bread Flour and Rye Flour, which rises better and gives a more "bread like" texture tha using stright rye flour.

Or so I've read. Let's kick this off and get started. I first made a "Rye Sponge" with the rye flour, yeast, sugar (I used raw, unfiltered 'local hive' honey), and some water. Mix well and then let sit for about 20 minutes. 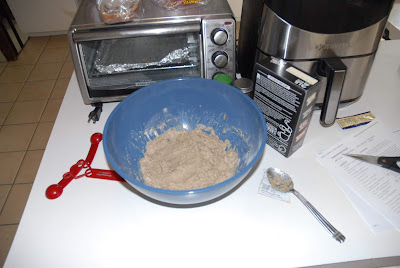 Further mixing in the other ingredients, the rest of the flour, and kneading/mixing the whole shebang together gives us this nice, buttered ball of dough. 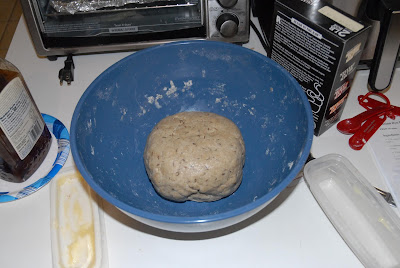 Letting the dough rise ~2 hours while we trimmed the tree: 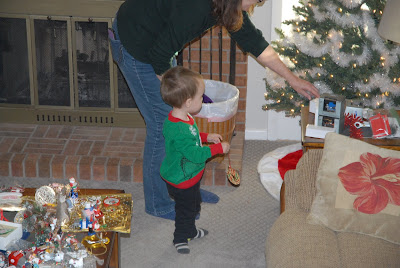 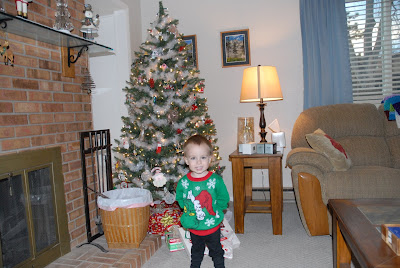 Here she is, all ready to be smacked down, and divided. 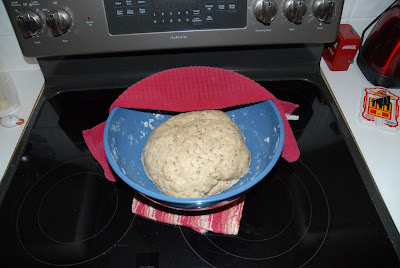 It actually got bigger than that. I took this shot at approx 75 minutes BRET (Bread Rising Elapsed Time), and we wound up at approx 150 minutes BRET.


I divided the loaves, and put them into bread pans that were well buttered up. 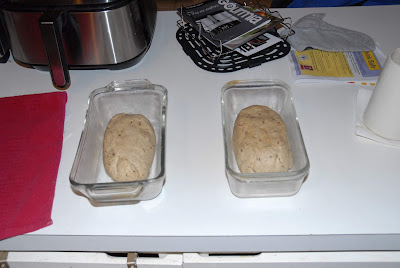 At 90 minutes PPIT (Post Pan Insertion Time), they were slathered with fresh butter from a local place, and popped into a oven preheated to 370*F. 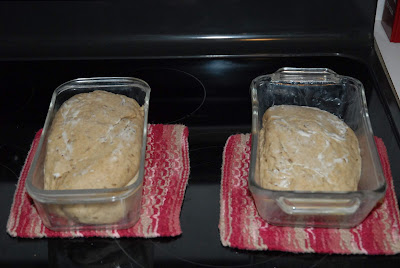 Forty minutes later we were rewarded with these: 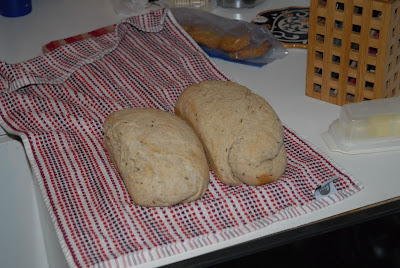 Two nicely browned loaves, and a house permeated with the lovely aroma of FRESH BREAD! 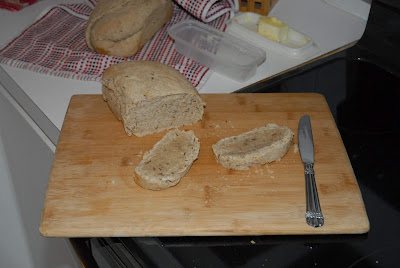 My Sweet Little Wife snagged the first piece, and her eyes opened wide when she took a bite. Uh-Oh....I must have screwed up the recipe......


NO! She pronounced it as "Excellent!". It's a bit denser than I would have liked, but holy smokes, it tastes GREAT. I'm amazed at how well it came out for my solo bread making experiment.

I did a bit of adjusting for altitude, and then next batch I make will be adjusted a bit more to lighten the consistency, but I think I nailed it on flavor. It's rich, filling, has a delightful crust, and an excellent flavor.

Hmm....wonder how much a bread making machine goes for.....