One of the hobbies I've acquired over the last 15 years has been the weather. "It All Started When...." I went to work for Boeing on the Sea Launch program, and one of my job responsibilities was to maintain the Weather Monitoring and Recording System and the Weather Radar System. As a kid growing up in Northern Illinois, I remember the little "Weather Station" my Dad had. Very simple thing, just a barometer for local air pressure, a thermometer for local temperature, and a hygrometer for local humidity. 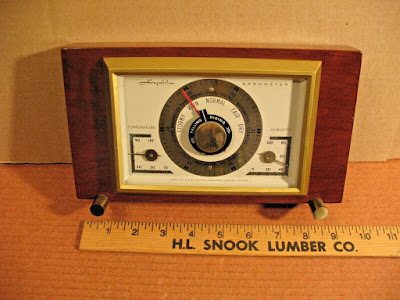 Some years later, he gave me one of these that I had for many, many years: 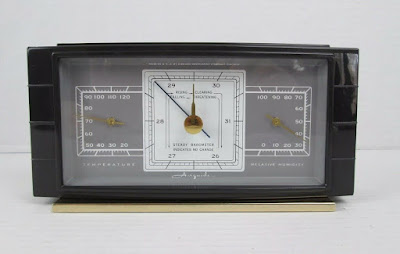 So I had a fairly basic idea of weather in general, which got much more detailed when I took flying lessons, and was formally taught "WEATHER!" in ground school. We got a pretty good education in weather, obviously geared towards flying, but we got to learn how to read the charts, read the forecast, and make an informed decision on whether to fly or stay on the ground.

In 1982 I moved to Southern California, where the weather is pretty boring compared to Illinois and now Colorado, so my weather skills kinda got archived.

In 2004 I went to work for Boeing, and woke those skills back up as part of my job duties. Working with the Meteorologists was very educational, and in short order I had a weather station set up at my apartment, and connected to the Internet so I could watch the (boring) weather back in SoCal while we were out to sea.

I brought those skills with me in retirement, and now have my own "Weather Monitoring and Recording System" here at home, which occasionally shows some interesting things, like what happened here last night: 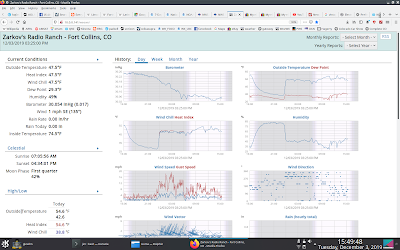 Look at the Outside Temperature and Humidity graphs, right at midnight.

The temperature shot up about 25*, from 25* to 50*, in less than an hour, with a corresponding drop in Relative Humidity.

With no "unusual" barometric activity.

This had me scratching my head for a while until I noticed the wind data. The winds kicked up approx 1MPH to 4MPH, with gusts to 15~20MPH, and the vector (direction and velocity) indicates they're coming from a West to Northwest direction, from down out of the mountains.

Reading the Forecast Discussion for today shows mention of Downslope Winds, known as "Santa Ana" winds in SoCal, and "Chinooks" here in the Rockies.

And it looks like I caught one coming through.