When we last saw our intrepid hero, he was praising his Sweet Little Wife (hmmm...might start an acronym page like the guys at the Chant) for letting him clean parts in the kitchen sink.....

Today's episode takes us deeper into the refurbishment of "Timing Cover #3" on my '85 Supra.

After the cover dried, I started doing the final cleaning of it to get it ready for paint. It's going to be 85* and sunny this weekend, which is perfect weather for wrinkle painting stuff. It was pretty clean after the bath I gave it last night, but still had some crud in a few of the recessed areas, and in places around the edges where my scrub brush didn't reach, so I cleaned all those areas using my Secret Sauce, Spray-Bottle Version (Windex with ammonia-D and about 30% denatured alcohol), and some other solvent for the greasy bits that were hiding.

In the process of cleaning it, I noticed a bunch of unsightly 'casting flash' from when it was injection-molded 30-odd years ago. Besides leaving sharp edges that can slice your hands when working on it, it's ugly, and has to go. I got out my trusty X-Acto knife with a new blade, and trimmed/scraped the flash off, then followed that with some 600 grit sandpaper on the edges to smooth them out nicely.

Yes, indeed you do detect some Mission Creep setting in, as usual with all my projects. This one doesn't have much, though.....

So after taking care of all the rough edges, and smoothly blending them in, I noticed that the plastic had retained much of it's gloss (hey, it's clean!), and since that's a Bad Thing when it comes to paint adhesion, I scuffed it up with some 600 grit that was already in the sanding block. Then I dusted it off, wiped it down with some brake cleaner, and set it aside while I did some other things.

Then I noticed (man, I'm really observant these days...) that it wasn't "flat", and had some low spots. Even though the wrinkle paint is quite thick, and easily fills in things like sanding scratches, it ain't that thick, and the low areas would likely show up after the paint cures.

So I block sanded the entire thing.

Is it 100% "flat" now? No, but then it's not going to Pebble Beach, either. Which is actually moot, because they'd take points off for it not being 100% OEM.

That aside, it's plenty flat, almost all the gloss is gone, and I'm just waiting for the weather to heat up to paint it. I'll bust any remaining gloss with a Scotch-Brite pad, wipe it down, and shoot the wrinkle paint on Saturday. 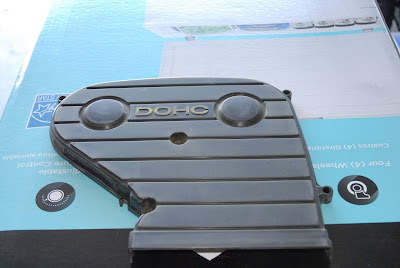 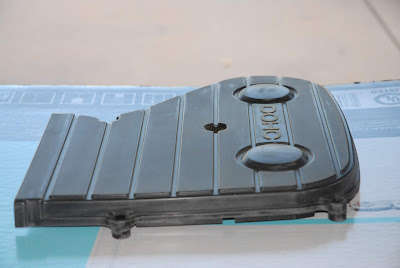