WELL......in a moment of weakness when I was at the local Hobby Shop, I bought an ARRMA "Senton" 4x4, Ready-to-Run, Radio Controlled model.

Hey, it's for the grandson, don't cha know?

Anywhoo....Back in the mid 1980's, during "Act II" of my life, I was hugely involved in R/C models. Even exercised my American right to run a small business supplying a few items to the local hobby shops. Barely broke even, had Tons 'O Fun, and met some cool people.

As I was digging things out down in the basement, I came across my little Kyosho "Mini-Z" R/C car. We used to "race" these on the ship during our transit back to Home Port, and we had a ball. The Company bought the cars (Radio Shack "X-Mods" cars), the track, and a truckload of AA batteries. I wanted my own car, asked if this one would be acceptable, and the "Sanctioning Body" approved.

So I ordered up some new tires, and was playing with it one day when The Little Guy was here, and he just loved it. I bought a couple of "RC Stunt Cars" at Harbor Freight for $7 each, but you can't really drive them; they're only good for doing spins, wheelies, and crashing in to stuff.

Naturally, that just won't do for TLG. I want him to learn how to control one of these, and to do that, you need something controllable.

And since he's a beginner (ya think?), that means learning how to drive one in wide-open spaces, like the cul de sac we live on, along with all eight front yards that line the sides of the street.

So we got this: 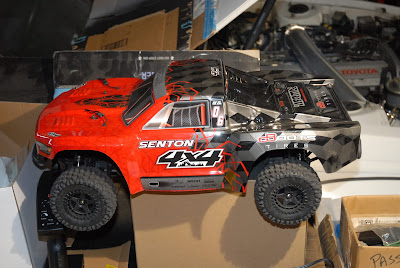 The motor in this brute looks like it escaped from my Makita cordless drill: 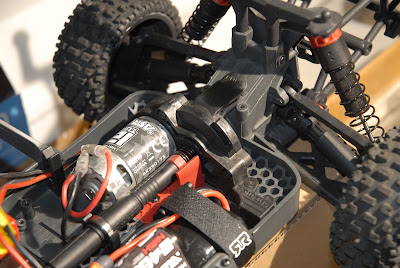 It's a "550 Motor", indicating a standard "can" size. 540 motors are used in some models, and the 380 motor is about "slot car" sized, so this is a YUUUGE motor compared to what I've used in the past.

It's well laid out, and seems pretty well built. 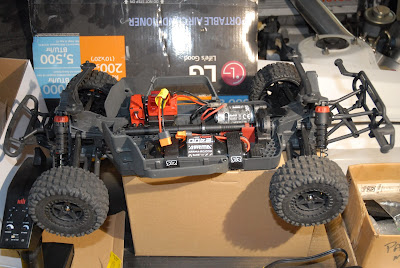 It has hypoid-drive differentials for the front and rear axles (Just Like Dad's Car!), but NO center differential. Instead, the gearbox powers the driveshaft between the two differentials through a "slipper clutch", which is really there to protect the motor from the shocks that happen after a jump, when the wheels are spinning full power, unloaded, and then slam back into the ground. It's a clever, inexpensive way to protect the driveline. This would be a no-no for pavement racing because the front and rear axles turn at the same speed, but running in grass and dirt there's plenty of wheel slip so that it doesn't matter.

The only weak point according to the guys that have had these for a while is the steering servo, which fails under heavy use. 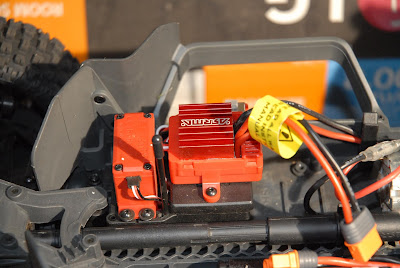 A direct replacement is $22 at the hobby shop, while the upgraded servo is $35.

HOWEVER....judicious shopping can find even better quality servos (stronger gears, ball bearings, more torque) for around $20. Since they pretty much all use the same connectors, and are the same size, installing a bigger, beefier, better-built servo is a no-brainer for $20.

And even though you can get a lot of Hot Rod parts for these, I'm not planning on buying any. When something breaks, I'll replace it with a better part, if available, but otherwise I'm just gonna leave it stock. I'm not going to compete with it, just have fun with TLG blasting around the front and back yards.
Posted by drjim at 8:50 PM