Been a busy week here on the radio scene. I really want to get this "Mark-I" version finished up, as the weather is getting seriously nice, and I have to get cranked up on Ms. Swan again.

Anyway.....I raised the center point of the antenna today, going from ~15' up to ~25' or thereabouts. My Great Plan was to bore a 1-1/4" hole in the top of the trunk, and drive two pieces of mast into it. That plan failed when I borrowed my neighbor's 17' ladder, and went up to the top of the tree and looked around. Uhhhh......NO, I'm not going to be fighting with a Heavy Duty 1/2" corded drill mounting a 1-1/4" auger bit in it while trying to maintain my balance (and sanity) while perched atop a 17' ladder. No sir, don't like it at all!

So I dropped back and thought about while I did some other things with the antenna. In reading some 50+ year old Amateur Radio publications, I discovered (REdiscovered?) how the Old Timers did it.

They bolted a 2x4 to their trees, giving them a flat surface to mount things to. Brilliant!

So since I had a 21" piece of clear cedar 2x4, I laid out a hole pattern, drilled some pilot holes in it, and proceeded to screw it to the tree with these really nasty 5" long SPAX construction screws. This is a 3" version, and even though they proudly proclaim "NO Predrilling! NO Splitting!", I still don't trust them, so I drilled 3/16" pilot holes through the cedar 2x4. 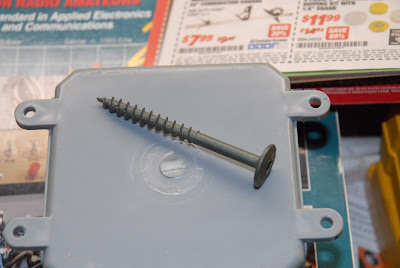 And after much huffing, puffing, and ladder moving, I now have a 10' mast very securely screwed into the side of the tree. 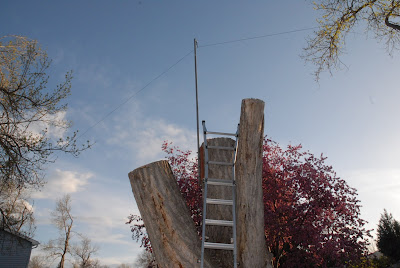 The cedar board is held in place with 7 of the SPAX screws. I drilled 8 pilot holes, but the last screw was giving me a lot of grief hitting the mast, so I left it out. These screws go through the 2x4, an inch and a half of bark, and then into the tree. Some back-of-the-envelope SWAGS indicate I've got the sunk 3" into the core of the tree, and I surrendered and went with 7.

The saddles that bolt the mast to the board are also held in with eight, 6" SPAX screws, so I really have fifteen points of attachment sunk 3" or so into the tree. 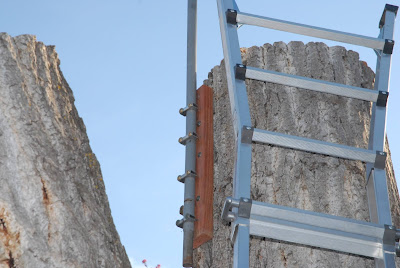 There's not much load on it at all, and wonder-of-wonders, looking at it from several locations ~90* apart, it's PLUMB! 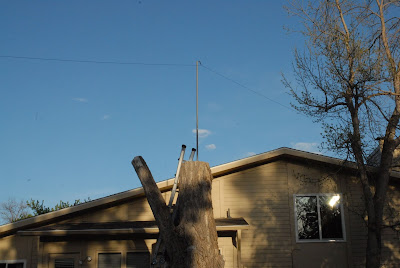 How the *(&^^ that happened is beyond me. I put one screw in fairly tight, and then used a level to get the board plumb, and drove in another screw to tie it down. The level still indicated I was OK, so I blasted the rest of the screws into it, and ran up the mast! 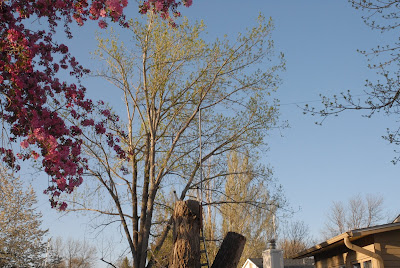 And for Brig, here's the crabapple in bloom. I'll take another one when the light is better, as it's a very pretty tree. First "pretty" tree I've ever taken care of. I've tended maples, and they're gorgeous in the Fall, but this one really makes me appreciate Spring. 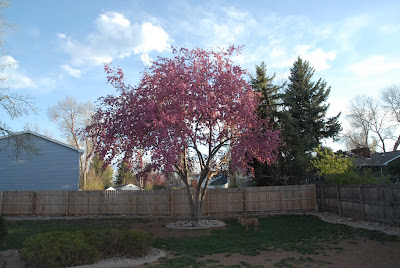 And on the bench, we have a little item I tinkered together. It's a "Feedpoint Interface Box", and nothin' special. 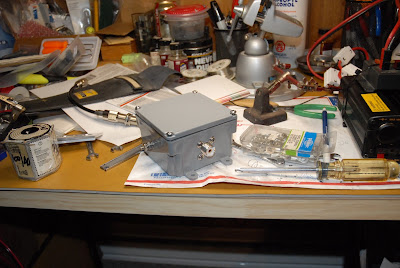 Just an SO-239 Type UHF female socket, and three attachment studs made using 10-32x1" screws, nuts, and washers. This is just a fancy way of going from coaxial cable to wire. The center conductor of the coax runs to the top, while the shield of the coax goes to two attachment points on the sides. The top terminal will connect to the 16-1/2' aluminum vertical I have partially assembled in the garage, while the two side terminals will each connect to a 16-1/2' long radial wire forming the counterpoise for the vertical radiator. Since the radiator will be about 6' above the ground, I'll just staple the two radials to the fence, and they'll be far enough above the ground to be "Elevated Radials", which I means I can "get away with" using only two. Three or four would be somewhat better, but two is enough as long as they're several feet above the ground. In essence, what I'm doing is making a more rugged, permanent version of my BuddiStick 20 Meter quarter-wave vertical antenna.

I've lost track of the number of times I just soldered the wires directly on the coax, wrapped it up with half a roll of tape, and hoisted it up into a tree. And they work just fine, thank you. Not super weather proof, but if you need an HF antenna NOW, they're perfect. 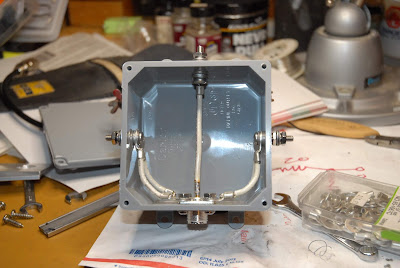 And I made some back-up plates for the outdoor entrance box, and the matching box inside the house. I don't like just screwing bulkhead feedthrough connectors directly into a plastic box. At a minimum, you need some big washers to help spread the unexpected side loads the connectors will suffer when somebody bashes into the connector. And when things like this are located outside, it will happen. So rather than having the connector(s) rip out of the box, I made some aluminum plates from some cheap stock I grabbed at Home Depot. 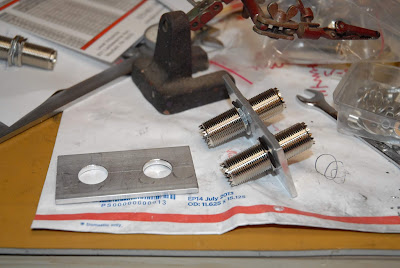 The plastic box is sandwiched between the two aluminum plates, which spread any loads out over a much larger area than what the thin hex nut holding the connector in the box does. 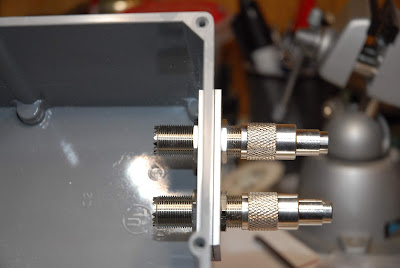 And here they are installed and sealed in the outdoor entrance box. 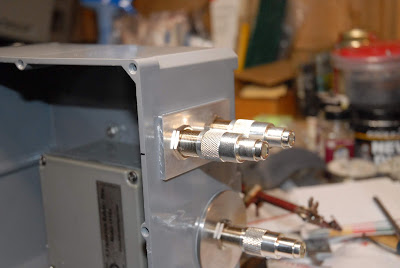 Notice the very large "Fender Washer" used on the other connector. These things are works of art, and they're much more a "Machined Spacer" than a humble "Fender Washer". They were also EIGHT BUCKS each! In retrospect I should have just bought the flat stock at Home Depot, but.....

The fettlin' part comes because there was some, uh....."drift" in the measurement/layout process that caused the holes in the box to be 1-1/2" apart, but the holes I made in the flat plates were something like 1-7/16" apart, causing me to "fettle" on the holes in the box with a rat tail file until all the pieces fit properly. Oh, well, the plates cover up the ovaled out holes in the box nicely.