I REALLY Needed to RTFM!

Which resulted in my GoPro Hero video camera turning on, but not going into "Record" mode.

So I didn't get any video of the Union Pacific 4014 "Big Boy" locomotive chugging up the hills of Tie Siding, Wyoming.

But we had a great time finally meeting up with Well Seasoned Fool and his sister, and learned a lot about the railroad out here. 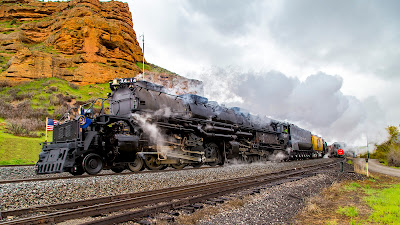 This was the first time I'd seen Live Steam, and it was wonderful! I've been around a lot of locomotives in my career, but none recently. I used to go to Conrail in Enola, PA and do Field Service work on the electric locomotives that used a big upgrade kit the company I worked for sold them. Most current locomotives are diesel-electric, meaning the big diesel engine spins a generator, which supplies DC voltage for the Traction Motors used in the trucks under the loco. The Conrail ones ran "Under The Wire", like an old street car, and since the overhead wires carried AC, you needed to rectify it to DC to feed the motors. Why all the emphasis on DC motors? Because until recently, a series-connected (Field coils and Armature in series, like a starter motor) DC motor was the most powerful way available. They make maximum torque at ZERO RPM, exactly where you want it to get an extremely heavy load moving from a standstill.

And I was around all the big diesel-electric locomotives, too, because the yard we did the upgrade in also had them around to move cars in the yard.

Diesels, are big, noisy, smelly, vibrating things that seem alive as they rumble the ground they travel over. The electric ones were much quieter, didn't stink, and ran "Like an electric motor".

When Big Boy went by, it was almost ethereal. Steam puffing out out of the pistons, the melodious sounds of the big steam whistle, and smoke pouring out of the stack as she came over the crest.

And as they passed, she just glided by!

UP 844 was also in the convoy, along with a diesel-electric, but it sounded, and felt, like the diesel was just along for the ride, and was maybe pulling it's own weight. Pretty much just idling, which made the hammering, clattering, diesel noise and vibration you feel from 50' greatly diminished. 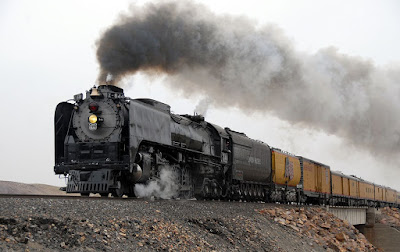 You could tell the two steam engines were working, but the sound was totally different than anything I've heard before. Very little vibration coming in through your feet, and none of the hammering impulse noise of a diesel's firing cylinders. This was a different sort of power, different even than the other steam powered things (ships with steam turbines) I've been around. This was a Reciprocating Piston steam engine, and the first 'real' one I've ever heard run. The Los Angeles Maritime Museum has a small scale model of a Triple Expansion steam engine that was supposedly capable of actually running, and the SS Lane Victory has the working prop engine used in the movie "The Sand Pebbles", but it's turned by an electric motor.

And you could sense the power of these two engines, but it didn't hammer you over the head like a triple diesel-electric would have. It seemed alive, like a few other machines I've had the good fortune to get to know, and I connected with it as solidly as I did to the P-51 Mustang and the McClaren CanAm cars when I first met them.

An amazing display of technology, and it thrills me that people care enough about them to spend the time and (SERIOUS) money to restore them, keep them running and usable, and share them with others.

And thanks again to Well Seasoned Fool and his Sisty that made this possible!
Posted by drjim at 10:22 PM