I didn't really "get into" monitoring the weather until I started working at Sea Launch in 2004, and wound up being assigned to keep the Weather Monitoring and Reporting System maintained and operational. That also included the C-Band Pulsed Doppler Weather Radar System, the only one ever installed on a ship. I always had one of those multi-instrument  barometer/thermometer/hygrometers around, but never seriously studied the weather. Then one of the Meteorologists I worked with showed me his home weather station connected to the Internet, and I kind of picked up (another!) new hobby.

I went with a Davis Instruments Vantage PRO2, and went through half-a-dozen different devices to get it on the Internet so I could monitor the weather while out-of-town.

My original Vantage weather station was getting a bit 'tatty', and while it was sitting outdoors here, we had a couple of huge windstorms come through, blowing over the 5' tripod, mast section, and weather station. It smacked the concrete patio pretty good, and damaged the cover for the instrument package.

The solar cells are for a fan kit I added when the station was sited on the big, flat, HOT roof of my apartment, and kept a flow of air  going through the sensor housing during the day. This helped keep the temperature sensor at more of an 'ambient' temp to counteract the effects of it being sited on a HOT surface. 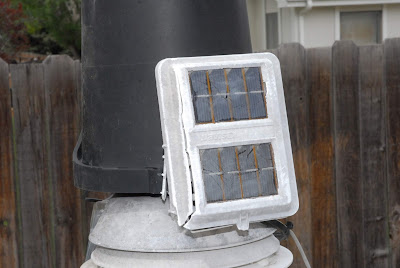 So I just kind of moved it off to the side and let it sit. A week or so ago I stood it back up, connected the cable to the display console, turned it on, and went through the setup procedure. Rats! It just sat there blinking at me, and I assumed (uh-oh....) that it was damaged, and no longer functional.

So, off I went to the Interwebz, and ordered a newer version. While waiting for the new one to arrive, I did the RTFM thing to acquaint myself with the new one, and this time I read the whole thing.

Uh-oh.....I didn't complete the setup procedure! Doing it right made the station come up and function normally. So while this one needs some mechanical repair, electrically it seems to be just fine. I'll get a plastic electrical "Junction Box" from HD, swap the guts into it, scrub it up, and either have a back-up unit, or more likely, I'll give it to one of the in-laws to use.

The new one arrived Friday, and I unpacked it, RTFM (at least Davis still gives you printed paper manuals), and commenced installation on Saturday.

And it went together, went up on the new mast, and worked 99% the first time! 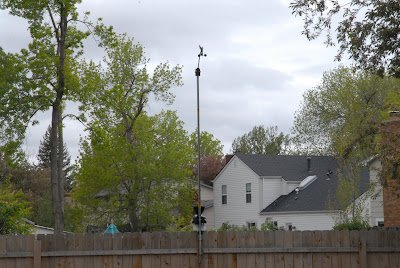 This is a much better installation than the original station would have been just sitting on the tripod, as the wind sensor is in the clear, and 15' AGL. The only "better" site I have for this is up on the roof of the house, and that ain't gonna happen! 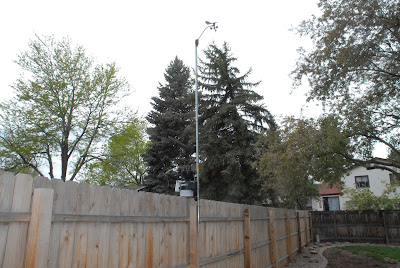 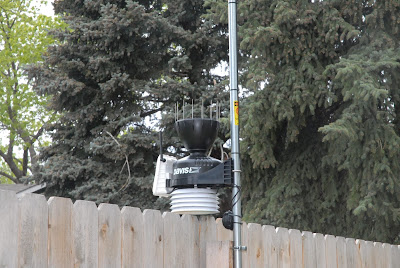 The vertical "wires" sticking up out of the rain collector are "Bird Spikes", and will discourage our feathered friends from perching on the rim, causing all manner of "stuff" to collect in the rain bucket besides just rain. The little black antenna sticking up on the Instrument Package is for the 900MHz radio link back to the display console. The cover has solar cells similar to my original station, but these are used to power the station, and charge the internal battery that gets used at night and on on days with little sunlight. 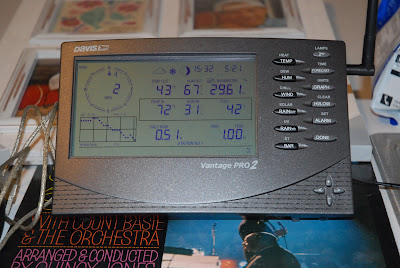 When I first installed it, I kept getting a "Low Battery On Station No.1" alert. Turns out I had the battery installed backwards! The solar cells were carrying the entire station, even at night! Yow....these must be pretty good cells. I swapped the battery around yesterday, and within 14 hours, the alarm had cleared, indicating that the cells not only run the whole shebang, but have enough 'extra' current to charge the battery. Good job, guys!

And the two stations agree very closely, unlike the "WeatherWise" station I bought last year as a 'gap filler' until I got the Davis station back on the air.

I have a little "ZOTAC ZBox" mini-pc that I'm going to use the get this on the 'Net, and I'm in the process of getting that all configured to connect to the Davis console, and our home network. 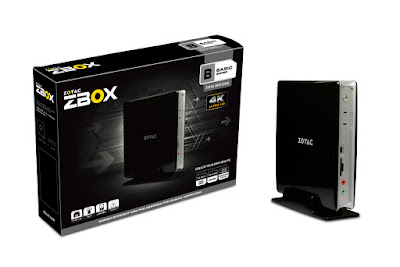 And we suffered a minor bit of storm damage from the front that went through and dropped 2" of heavy, wet snow on us. 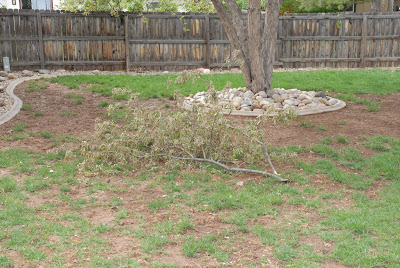 A branch from our crabapple tree came down, nice, clean break, hopefully not injuring the tree much. I'll let this dry out, strip the leaves off it, and we'll have some nice kindling to use.
at May 21, 2019