Anybody Up for a Little Sinatra?

Well, i finally got around to gathering up and patching together enough stuff to drive the HitMaker speakers I finished a while back. 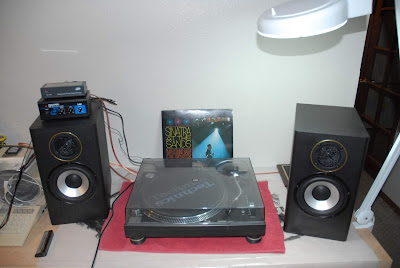 I had the little amp in the workshop, but the turntable and phono preamp were stored (buried?) in the 'cold storage' area under the steps in the basement that my seet little wifer refers to as "Der Boonker" for some strange reason. Must be the Gadsden Flag hanging inside. Oh, well....

So I dug those things out, then went on a hunt for the 12 Volt power supply, aka "Wall Wart", the preamp needs. I have several medium U-Haul boxes  packed full of these little critters, some AC output, some DC output, and even some regulated ones. Took about an hour or so, but I now have them semi-sorted, and found one that works for the preamp. 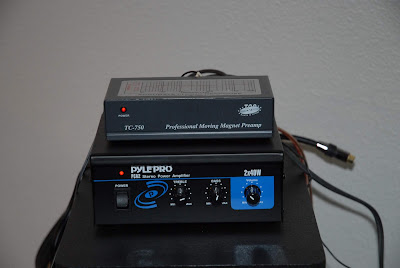 I have no idea where I bought the preamp from. Might have been eBay, or Amazon, or one of the specialty vendors I buy things from. It had rave reviews on the audio forums, does exactly what I need, and was under $100. Well under, IIRC. It's dead quiet with no input, sounds good to my tin ears, and it's built like a brick in a nice, heavy steel case.

The Pyle amp was sitting on the shelf, victim of my shack "realignment" plans. I was going to use it with my Flex 5000 as the 'audio output' stage, but that's not needed any longer. It's rated "40 Watts" per channel, but I think that might be downhill with a tailwind on a good day. That power rating is also spec'd as into 4 Ohms, and these are 8 Ohm speakers, so it might not have enough voltage to drive them to that power level. In any case, the amp isn't happy with the speakers, and depending on how you have the Bass control set, you can easily get to a volume setting where it's pretty obvious the speaker/amp combo is going into some kind of sub-sonic oscillation. If it were happening at a lower frequency it would be called "Motorboating", but you can hear that. This oscillation makes the speaker cones appear as if they're 'vibrating' in and out. I suppose I could break out my scope and look at the audio.....

BUT.....if I keep the Bass control down some, and don't try and rattle the windows in the basement, the amp and speakers play nice, and the speakers sound really nice. You have to be pretty much "on axis" with these, and as you move around you can hear the sound change. It's more pronounced if you get above the speakers. The tweeters start to overpower the other speaker, and it sounds too "bright". I still haven't decided where and how to mount these, and have to give it some more thought.

The turntable is my 'Ol Faithful' Technics Quartz Direct Drive SL-1210MK5, and yes, that's all on the label. Cartridge is a low-end Audio-Tecnica AT92E, soon to be replaced by an AT440MLa, a much better cartridge. 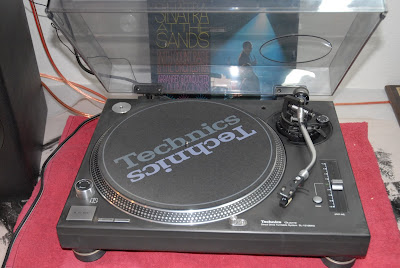 Taken as a whole, this little 'mini-system' sounds pretty good. I won't go into all the audiofool techno babble, but Sinatra sounds like he's 10' from you.

I can hardly wait to get the big Heathkit completed. Then I will be able to rattle the basement windows....
Posted by drjim at 10:24 PM