And I just hope the gate holds together.

The NWS just issued a Severe Thunderstorm Alert for this area, warning of possible winds in excess of 60MPH. We're just on the far Northern edge of the warning, but the folks in Loveland and Greely look like they might get hit with it.

"The Gate" has been a continuous PITA ever since we had it installed. The builder and I have different definitions of what "Heavy Duty" means, and he didn't take it to heart when I told him I wanted it built "commercial strength, like a corral gate", and he got hinges and a latch that weren't up to the task.

One big boo-boo he did was to mount the hardware using the included lag bolts. The buffeting by the wind loosens the lag bolts, allowing more slop in the gates, meaning the wind batters them even harder, loosening the hardware further and faster, right up until the latch blows apart, and the gates start swinging and banging, requiring some emergency repairs.

You have to use through bolts, preferably galvanized, with flat washers under the bolt head and the nut, along with a lock washer under the nut. That's going to get done in the Spring when I replace the gate hardware.

So for now, thanks to Extexanwannabe, I now have a viable solution.

It's called a "Stake Holder", and is basically a big bracket that you put on either side of a door, and when it's "Katie, Bar The Door!" time you slide a 2x4 through it, and the door is rendered in-op. 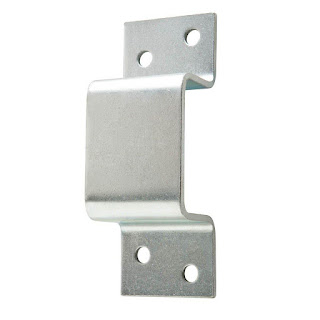 I bought four of them today, and now that I've made a sketch of what I want to do, I can measure the thickness of wood on the fence I'll have to drill through, and know how long of through bolts I'll have to buy.

I have to cleverly position these things to take advantage of the structure that holds the pickets, as the pickets have about as much strength as cardboard, and I don't want to start adding "structure" to the gates. I eyeballed it today for a good 20 minutes and then made a sketch, so tomorrow I'll take a bracket and tape out there, measure how thick the wood is I have to go through, add a fudge factor to that, and I'll go buy the bolts, nuts, flats and split locks, and a couple of good 2x4's, in cedar, if they have them.

Then I'll measure, drill, bolt, and slide in the 2x4's and put a "Closed Until Spring" sign on it.