There's nothing magic or wizardly going on here. The circuitry doesn't care if the voltages come from AC, DC, Solar, Nuclear, coal, or filtered unicorn farts. If you supply the radio with the correct voltages, it will operate.

In order to take an AC powered radio and run it from batteries, we'll need to make some changes to the wiring. Specifically, we'll need to connect the correct voltages to the correct circuit points for both the B+ and Bias supplies. To do that we'll add some wires to those points and bring them out of the radio for the external power to be applied, along with a ground connection to a new plug.

And we'll need to separate the filament wiring from the secondary of the power transformer, and bring those two (or three, in the case of a radio having both 6V and 12V filaments) leads out, too.

So, we'd need to use a 6-conductor plug and socket, rated to withstand, say 300 Volts.

But in a real SHTF/TEOTWAWKI situation, we'd probably just run wires out of any convenient opening in the radio case.

Here's the schematic for the power supply section of an SB-310 General Coverage receiver: 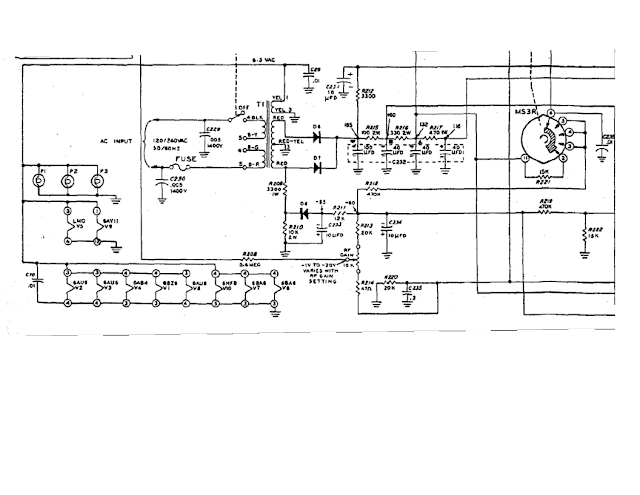 Just about smack dab in the middle, you'll see two symbols that look like right-pointing arrows, labeled "D6" and "D7". The right side of this symbol, the direction the arrow is pointing, are the positive (Cathode) ends of the rectifiers. Solder a red wire to this point, and bring it out for later connection. The wire has to be rated for at least 300 Volts to be safe, but wouldn't have to be much more than 20 gauge as the current draw is pretty low. Since we'll be feeding in a positive voltage, and that voltage will be blocked by D6 and D7, no other surgery is required. *IF* D6 and D7 are shorted (blown by that commie EMP blast!), just clip them out of the circuit.

A little below that point, you'll find D8, which is the rectifier for the bias supply. This time you'll want to solder an orange wire to the junction of D8, the capacitor C233, and the resistor R211. This will be where we apply the -85 Volt bias supply. If D8 is shorted, just clip it out like you did to the rectifiers.

Underneath the chassis should be numerous terminal strips. Look for one with a "foot" that's grounded, and solder a black wire to it.

On the terminal strip pictured below, the "#2" position is the "foot" I was talking about, which bolts it to the chassis, and provides a ground point.

That takes care of the "high" voltages. Just make sure the red, yellow, and black wires you added are long enough to come out of the radio a foot or two, so you'll have some length to work with when you connect your battery bank.

For the filaments, we'll have to be a bit more careful. Since we'll be using DC to power them, we must disconnect the secondary winding of the transformer or otherwise it will short out the new DC supply to the filaments.

Look back at the schematic for "T1", which is the power transformer. You'll notice (sorry, but I'm assuming you can "read" a schematic...) that leads "1" and "3" are the yellow filament power leads. One side is grounded, which means it's common to the B+ and Bias supplies. Pick the yellow lead that's NOT grounded, and cut it loose from the terminal strip. Add a new yellow wire to this point, and bring it out like you did the others.

That should complete the modifications to the radio. Simple, and pretty easy to reverse if the AC power ever comes back!

For the filament supply, you'll have a single battery in series with a 2 Ohm, 25 Watt resistor (drops the 12 Volts down to 6) on the positive side connected to the yellow lead coming from the radio, and the negative side of the battery going to the black wire from the radio.

Will this work, and power the radio as if it were plugged in?

I have no doubt it will. As I said at the beginning, the radio doesn't know/doesn't care where its power comes from. Apply the correct voltages to the correct points in the circuit, and it will function, assuming it was an operating radio to begin with.

If anybody wants to loan me 16 car batteries, I'd be willing to modify the receiver just to prove this will work!

Personally, I'd rather just buy a few inverters and some extra ammo cans to keep them in. Saves a lot of work lugging batteries up the hill the old Ham lives on.......

This is a LETHAL voltage source! You will NOT get a second chance if you accidentally contact the positive lead while grounded.

Use EXTREME care when operating this power supply!

You have been warned!

It would definitely be a good idea to fuse the positive lead of the battery string, and properly insulate ALL exposed metal connections, but make sure you use a fuse rated for 250 VDC, and with a very high "interrupting rating" so that the fuse doesn't turn into a bomb. Fuses for this service usually are packed with sand, and use a ceramic body instead of glass, so that when the fuse link inside opens, the grains of sand fall into the gap, and quench the arc. Otherwise, with a supply this "stiff", there will be enough energy available to keep the arc "lit" when the fuse link opens, and a plain glass body fuse will violently disintegrate, possibly causing somebody to get hurt.

And a 1 or 2 Ohm, high wattage current limiting resistor in series with the positive lead wouldn't hurt anything, either.
Posted by drjim at 9:00 PM