I just received an email that one of my dear friends passed away last night.

I'd known him since 1995 when I got back into Amateur Radio, and immediately "clicked" with him, both of us having been involved in the Aerospace business here in SoCal.

We'd both worked on many Things We Can't Talk About, but from little snippets of conversations, and inside jokes over the years, we both had a pretty good idea of what programs we each worked on.

I looked upon him as one of the many mentors I was blessed to have over the years, and through our interaction, I was able to help him with some of the new fangled computer stuff we all take for granted these days.

He was 87 years old, from Montana, and served in WWII during the Battle Of The Bulge as a "green kid from nowhere". He went on to college after the war, and into Electronics and radio.

He was also an avid sailor, and was my go-to-guy for any obscure questions I had about ships, sails, and rigging.

Every year my radio club has a "White Elephant" auction to raise funds for our Field Day activities, and there was a floating "Booby Prize" that passed among the club members from year to year.

It was a long running joke that somebody would place a bid like "I'll bid $10 if Dale takes that home!", promptly followed by "I'll bid $25 if JIM takes it home".

One of us always got "stuck" with it, and we always brought it back the next year so the game could continue.

It was my turn to "win" the item last year, and since we weren't able to have the White Elephant Sale this year, it's still sitting out in the garage, wrapped in plastic.


It's an HP 200AB Audio Oscillator, a direct descendant of the model 200A that launched Hewlett-Packard. 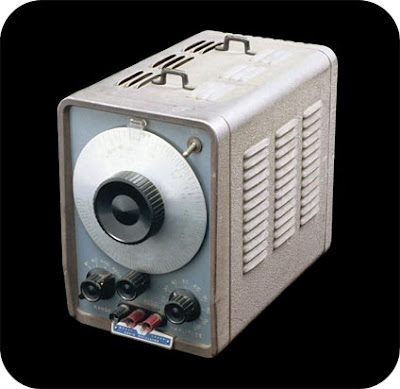 I'm going to get it out of the garage and restore it to it's former glory and keep it, as it's really a very nice piece of test equipment, and other than the decaying leather carrying handle on top, and an unsafe cracked and split AC power cord, the case, front panel, main dial, and all the knobs are in very good condition.

I think my friend would approve.
Posted by drjim at 12:40 PM