Field Day Is NEXT Weekend

And I'm dragging all the stuff out of the garage and shack to do a dry run.
The picture is yours truly from 2010. The smile on my face is due to the fact that I'm in the process of making 35 satellite contacts....the best my club had EVER done!
In 2011 I made 45 contacts, another "record" for the club. This year we've lost a couple of satellites, AO-51, and HO-68. AO-51 was an FM only bird, but HO-68 was a linear transponder (SSB and CW), and I made about HALF our contacts on it last year.
AO-51's batteries finally failed after 7 years in orbit, and HO-68 suffered a failure of a relay used to switch things around, and has been beacon-only since January 2011.
Back later with more..... 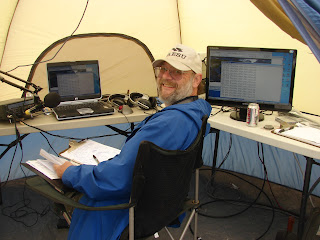