Kinda shot myself in the foot on one section of this.

These are the "Pinch Rollers" that hold the tape to the Capstan, and pull the tape through the machine. This is the OEM unit, and you can see the wear on it. Yes, they're tiny. 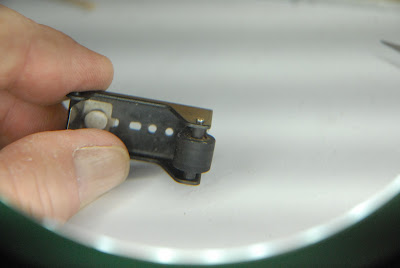 The replacements I bought were just rubber sleeves to fit over the bronze "Oilite" bearing. They came with ZERO instructions, and required you to press off, or otherwise remove, the OEM rubber from the bearing. OEM assembly on your left, removed from the arm it normally resides in, and the new sleeve on the right. 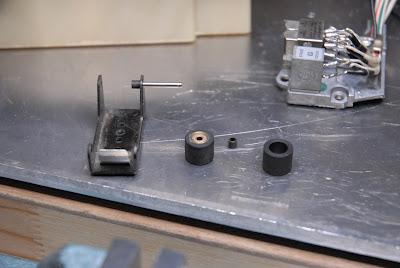 I pressed the bearing out using two properly sized sockets and a small machinist's vise: 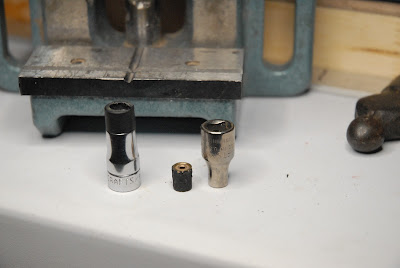 BUT.....(always a "but", eh?) I neglected to scrupulously clean the bronze bearing of all traces of the original rubber. The stuff would NOT come off easily, and it may have been vulcanized on to the bearing. I cleaned off as much as I could, pressed the new sleeves back on, and put it all back together. 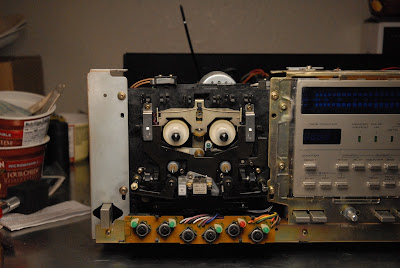 I moved it from the "Mechanical Bench" over to the "Final Test and Adjustment Bench".

It randomly dropped out of play, so the testing stopped until I could address that. It would Fast Forward and Rewind properly at a high speed, but sometimes it would play for 2 minutes, sometimes for 10 minutes, but it always dropped out. It was dropping out because the Reel Motor, that motivates the Supply and Take-Up reels inside the cassette  was stopping. When that happens, the tape counter no longer functions, the controller sees "No Tape Motion", and drops everything offline. When it stopped you could always see some slack tape over on the take-up side, which is what clued me into the Reel Motor being flaky.

Using a search of the forums I found several threads on this, and followed their troubleshooting guide. Measured the voltages recommended while trying to play the unit, and those measurements confirmed the Reel Motor needed some serious servicing. Turns out it's quite common in these 40 year old Pioneers. New motors are NLA from anybody, and the ones from a parts unit would be highly suspect. They can be refurbished, however, so I read and re-read the instructions, and printed them out so I could go into the little electric motor and do the work. It's about 75% bigger than the "Mabuchi 540" motors we used in out slot cars, so it didn't bother me to do the work.

I'll go into the "Reel Motor Rebuild" tomorrow, and then back to those pinch rollers.

I'm about 99% finished with the mechanical stuff at this point tonight, and when I button it back up (again....) I can continue on the electronic adjustments, and whoo-boy....there's a whole slug of them to check/adjust.