With apologies to juvat over at The Chant....

As part of the electronics shop "upgrade", I dug out my old HP "SmartClock", which is a GPS-based time and frequency standard. I've had this little box for around 20 years, and it always worked flawlessly. I originally bought it to use as high-accuracy portable clock to synchronize my laptop clock for portable satellite operation, as well as give me an accurate LAT/LON position to enter into my satellite tracking program. Kinda killed two birds with one stone. It also has a VERY good 10MHz timebase in it, which I had plans to use, but never did. These were originally made for use at cellphone towers, where accurate time was used for billing and hand-off timing between towers.

The neat thing about the 10MHz timebase is that it's not only an HP "Double Oven" oscillator, but it's also "GPS Disciplined", meaning it gets locked to the extraordinarily accurate clocks in the GPS satellites, and provides a 10MHz signal that accurate to something like one part in 10e12. Crystal oscillators are about "as good as it gets" for short-term stability, but can, and usually do, drift over time. Part of the GPS signal is a one-pulse-per-second (aka "1pps") timing hack that's ONE SECOND, by God. Well, about as good as He lets us make for now.  How the GPSDO works is explained in the link above, so I won't go into it here.

Anywhoo.....When I plugged it in some years back, none of the lights came on, so I shelved it until I could a round tuit. Opened it up the other night, and started poking around to figure out why it wasn't powering up. The supply was good, but no blinky lights. Then I noticed this: 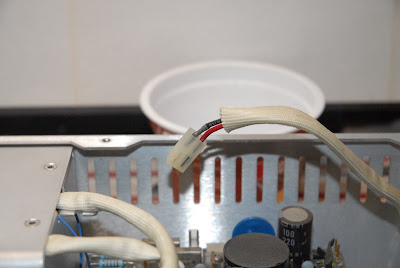 Well there's your problem....One of the Molex contacts came loose in the housing, and slid out of position when the housing was plugged into the board.

Easy-peasy fix. Pry the tiny locking tab out a bit, snap the contact back in the housing, and reconnect.

Fixed and ready to plug back in. 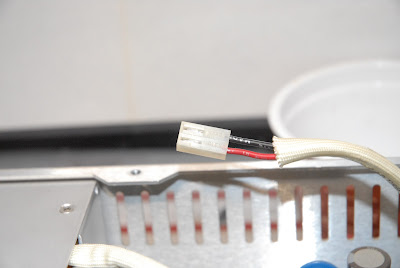 The next step was finding the old software I had, and then getting it to run on Windows 7, which is still a "Work In Progress". In the meantime, I was able to connect to the clock using a terminal program, and an RS232-to-USB adapter. Two issues with older GPS units is that if the clock has been turned off for ~90 days, and/or moved a few hundred miles, it won't have a proper list of satellites to look for when it's turned back on.

This one's been off for at least 4 years, and has moved 1100 miles since it was last used. In that case, you have to tell the device to run a "Sky Survey", and collect a current almanac from a satellite ASAP. So, connecting to the clock, I sent ":gpsystem:survey once", so it would grab the first satellite in view, and get an almanac. With a GPS antenna sitting in the basement window, it was able to do this, barely, and at least get itself locked to two satellites. 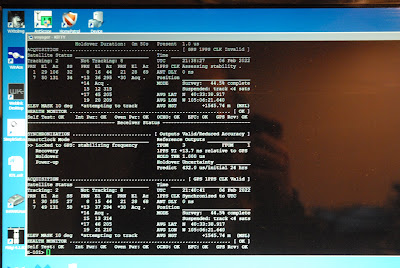 So it's just sitting there now collecting data, and begging me for a better antenna, which will have to wait for Spring when I can drill another hole through the foundation (poured concrete) and snake a new cable into the basement.

And I'm still waiting for the photocells I need to finish the THD Analyzer. USPS says they cleared Denver this morning, so hopefully I'll get them tomorrow.

Have a happy and blessed Sunday!