Removing the dead junipers in the back yard came to a screeching halt earlier this year when my shoulder went on strike. I had some kind of big "knot" in the muscle that you could feel moving around when I moved my arm around. My Doctor ordered an ultrasound, which came back negative, the findings being "No Solid or Cystic Mass Found".

Sooooo....off to Physical Therapy for 8 weeks, during which time the "knot" got smaller and less painful. It's still there, but not nearly as annoying as it was.

I still can't do a lot of the yard work I started off doing early this year, even if I take it pretty easy. I'm still having issues with getting lightheaded at times (hah....what's new, eh?), and my BP bounces around a lot, with the "Irregular Heartbeat" icon popping up almost every time I measure my BP. I have an appointment with my Cardiologist next month, and we'll see what he makes of the readings from the "ZIO Patch" I wore for two weeks.

ANYWAY.....now that my son is here, he's been helping out a lot with these things, and today he and SLW went bonkers on the junipers in the back yard.

They cleared out all the dead stuff back in Pebbles' "forest": 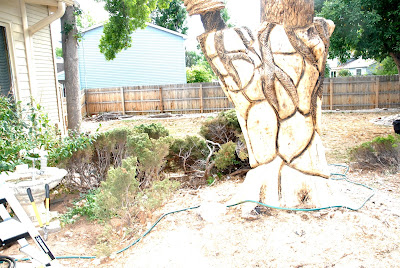 And then attacked the dead grove of them out on "The Point": 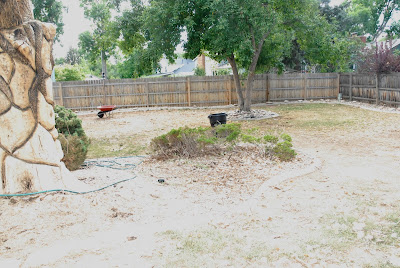 Sorry the pix are kinda blown-out. I'm so used to popping up the little flash on the camera, I did it out of habit, making the camera switch exposure modes.

I'll help with the raking up, and feed the apple tree in the background, later today when it cools down. I can't do too much more than light work when it's over 90*, so this is part of my "Taking It Easy" when I'm doing yard work, and it's also put a major crimp in working on the Toyota....