And yes, the bread is just as good the "next day" as it was out of the oven, but alas.....the crust loses it's crispy crunchiness within 12 hours, even when bagged. If I left it unbagged it would become construction material within a few days.

So I've also been tinkering at least 30~45 minutes a day on the Valco. I had a 20uF/450V cap for the first filter, but didn't have any 10uF/450V caps for the second and third filters, so I put off rebuilding the power supply section until I had the capacitors "in stock", and they arrived yesterday. 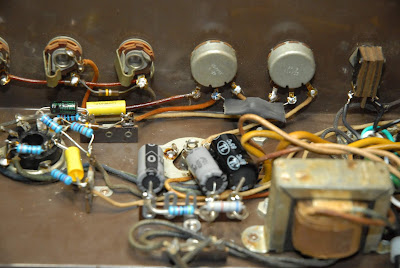 And the complete chassis. 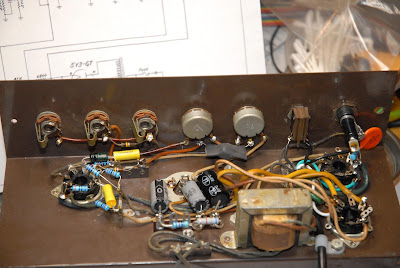 I'll bench test it before I put it back in the cabinet, as I want to record all the voltages. I'll bring it up slow on my big Variac, and monitor the input voltage and current without the tubes in it This will let me record the No Load voltages that the transformer puts out, and measure the excitation current, telling me the "health" of the Power Transformer.

I cleaned the case as well as I could, which really isn't very well, and glued down as much of the loose covering material as I could. The "Tolex" vinyl covering is pretty shot on the top, with much evidence of the amp being used as a small table. I guess the ring-shaped watermarks and "cigarette" burns are just part of this little amp's history.

It does look much better with the cleaned, reversed piece of grill cloth in there! 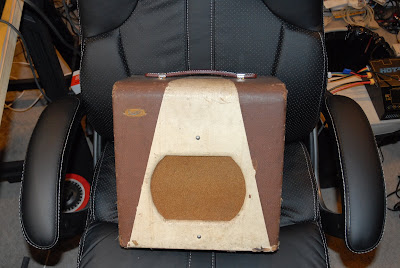 The hardware on the new leather handle is almost too shiny. I would have just changed the handle part, but the OEM hardware was riveted in. There was no way I could have removed it without damaging something, so I took my Dremel and used a cut-off wheel to slice off the rivet heads. You have to remove the handle to replace the strap because there's little pins coming down from the hardware, through the slots in the strap, and then down into the wood, to prevent the strap from pulling out. 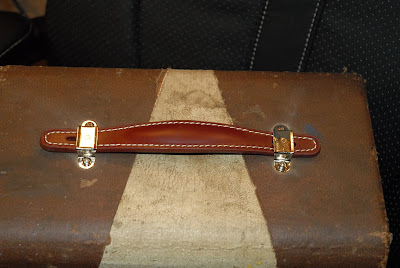 And the replacement speaker dropped right in, as hoped. 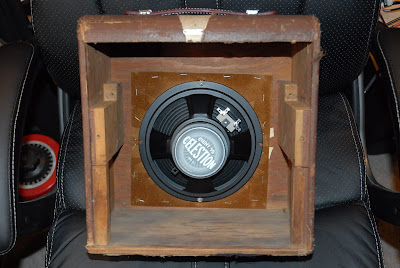 Now I'm scratching my head trying to decide if I should rebuild the missing back plate that looks like this. 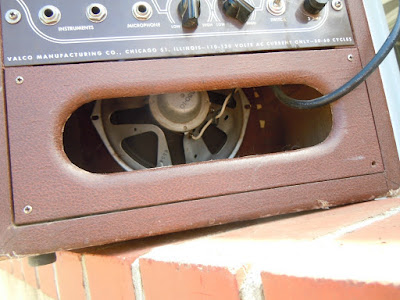 I can easily get and cut a nice piece of wood to fit there, but I don't have a router to do the nice edge. I wouldn't cover it, just stain it dark, and maybe "age" it a bit and bang it around a bit so it looks like the rest of the amp.....

On the model car front, I had an "Epiphany" the other day regarding the motive system. Turns they use a "Six Step Inverter" to power the little brushless motors with. In finding and reading the datasheets from the manufacturers who produce the controller chips, I went over the waveforms fed to the motor, and son-of-a-gun, they're identical to the waveforms of the equipment I used to design for McGraw-Edison back in Illinois.

So now I'm sketching up some diagrams and drawings for a small dynamometer to test and measure these things with. I've done it before, but the smallest motors we worked with were around 50HP, going on up to 450HP, which was the largest off-the-shelf 480V three-phase motor you could buy at the time.

And it looks like a lot of the specs on this "Hobby Grade" stuff are inflated enough to send my bogosity meter towards the top end. Reminds me of the Wild West days of home audio when outrageous claims for the output power of home stereos were the norm.......
Posted by drjim at 11:33 PM