Since my Sweet Little Wife gave me this really cool Six Hundred Watt  Christmas present, I've been itching to try it out. 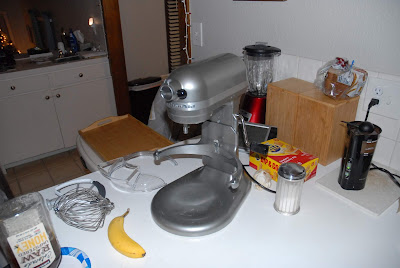 And in order to get to understand it better, I went to what we'd call a "Reference Design" for a recipe. Just plain old white bread from a recipe that King Arthur Flour calls "Hearth Bread". It was printed on the back of the flour bags as "The Easiest Loaf of Bread You'll Ever Bake", and has flour, water, salt, sugar, and yeast. Period. Oh you use some butter to grease the bowl once it's mixed, but it's as simple a yeast-bread formula as you'll find.

I didn't take too many pix this time, as The Little Guy is over, and wanted to "help".

After mixing and raising once, I divided the dough, "shaped" the two pieces a bit, and put them on a cookie sheet. The "stuff" around the loaves is supposed to be corn meal, but lacking any corn meal, Sweet Little Wife said we had a box of Jiffy corn muffin mix, and I could use that. WELL......no. It has other stuff in it, like lard, and when you have lots of extra in the pan, it burns.

So here's ready to go in the oven. 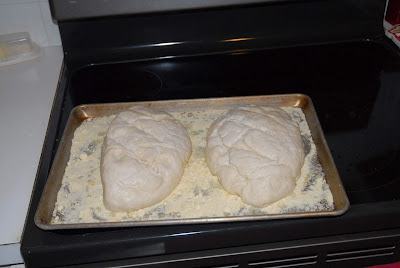 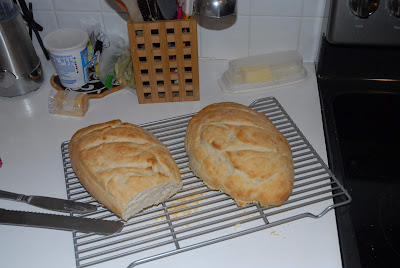 Sweet Little Wife mauled the defenseless little loaf while I had my back turned to get the camera!

So how'd it turn out?

WELL.....I made two mistakes this time. The first concerns the mixing time. WOW.....does this thing CRANK! The mixer manufacturer suggest 4 minutes time, while the flour manufacturer said 7 minutes. I went from dry ingredients in the bowl to nicely mixed dough that was cleanly pulling away from the bowl in about 4-1/2 minutes. I should have stopped right there, as that's when it's properly mixed. Well, I kept mixing away, and stopped after about 6 minutes when I saw the dough was changing consistency. The good thing is I had an Ah-HAH! moment as I watched the mixer doing it's thing. I now grok when it's properly mixed, and that's a big thing to me. Ultimately, it appears to not have 'damaged' the bread, but the texture is a bit heavier. Not much, like that first (burp!) batch of rye bread I made, but the gas bubbles aren't what I'd call "nailed it", and since I got the yeast understood, the next thing is the mixing procedure so I can get consistent results.

The next mistake was using the Jiffy mix instead of straight corn meal. Besides the fact that the excess material on the tray charred, the other ingredients in the mix had an effect on the bottom of the loaf. You definitely get the corn meal taste and texture, but the (overcooked) "shortening" in the product flavored the bottom of the loaf. Not a bad flavor, but it's definitely "different" than what you'd expect.

Anyway.....these two mistakes are easily corrected, and I actually learned something useful about mixing the dough.

And the end result? 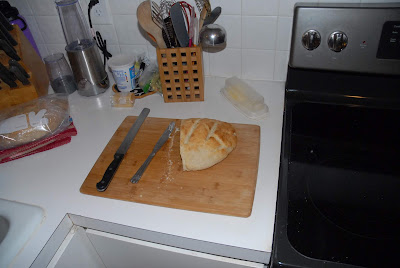 Half a loaf gone in 30 minutes. It tastes great, it's not heavy at all, and once again, the crust is superb. Without the two mistakes I made, I'm confident this would have been a hit out of the park for me.

Since I'm now out of yeast, I'm making up a list of stuff to get, like more flour, some straight corn meal, and some semolina to try in place of the corn meal. The recipe is "either/or", and I'd like to see the difference in taste. Since the recipe makes two loaves, I'll do one of each next week.

The next baking project will be cinnamon rolls, so I'll add those unique ingredients to the list. I really like cinnamon rolls.......
Posted by drjim at 8:59 PM