I'm chugging along on the little Valco amplifier, and I should have an update (with pix, or it didn't happen) later today.

Got the rest of the parts for it, along with some parts for the little race car. Turns out I have a steering linkage angularity problem that requires a more elegant solution than what I previously came up with, which was just a longer ball-stud on the servo to get things to line up better.

And since Grandma #2 (aka "Nana") is down with a really, really, really bad cold, we've had The Little Guy during the day while Nana recuperates.

He "helped" with the bread last Sunday, but decided right off the bat that he didn't like playing with squishy bread dough, so he mostly just watched. He got a real kick out of watching the dough hook rotate and orbit in the mixing bowl, though.

This is the input stage and driver stage (dual triode tube)  of the little Supro amp: 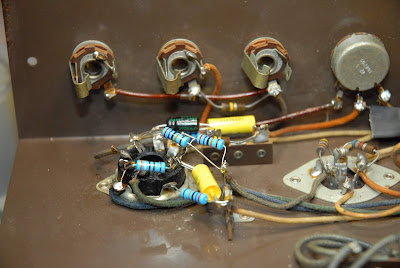 I've replaced all the capacitors (they were leaky) and all of the resistors. The resistors, doing as 1/2 Watt carbon compositions resistors like to do, had all drifted high in value to outside their marked tolerance. I also changed the physical location and connections of several of the parts to eliminate ground loops, and give all the signal grounds a "Common Point Ground" connection. The new parts have higher ratings and tighter tolerances than the OEM parts, so once this is finished it should be good for another 50 years.

The new grill cloth arrived, and tomorrow I'll use the old one as a template to cut the new cloth. I'll scrub up the cabinet and replace the handle and hardware before I staple the new cloth into the cabinet. Then I'll mount the new speaker and the cabinet will be put aside for final assembly. Cleaning the cabinet will also involve some "rework" of the covering material. I can buy new, matching material to completely recover it with, but I'd like to preserve some of the originality of it. Think of this as being a "RestoMod" type of project and you're pretty close. New under the skin, but doesn't look a day over 60!
at January 09, 2020