Was gonna start this earlier today, but TLG was here, and we were reading "Pop-Up" books, much to his delight. He certainly enjoys books, and that's a behavior we definitely encourage. He knows all his colors, most of the ABC's, and can count forwards (and backwards!) from zero to ten.

Yeah, I'm the guilty party for insisting he include zero in his counting. And he learned them backwards hanging around with me doing simulated countdowns. It was a real treat watching his Lightbulb Of Comprehension go on when he realized the numbers were the same, but they meant different things going up and coming down.

I used my Standard Reference Recipe for this batch, proofed the yeast (a fascinating subject all it's own) while I fluffed and measure out the flour, and just to throw another variable into the mix, I dissolved the salt and sugar into the warm water before I added it to the flour. It just seemed the right thing to do to ensure complete mixing.

The major difference this time is that I baked the loaves in the glass bread "pans" we have. Probably just me, but I always associate the word "pan" with something made of metal, hence the quotes. Guess I should just call them baking dishes....

I won't bore you with the construction details of the latest "Bread Build" since you've seen them all except to say I ran the mixer one notch higher this time. It cut the laboring of the motor down, it really mixed the dough well, and when I carefully looked at the slider control, I realized this was the speed I was supposed to be using per the mixer's manufacturer. Le Sigh.....

And I did NOT "gently slash"  the tops of the loaves this time, and they did not deflate on me. I just brushed them with warm water, and popped 'em into the preheated 450* oven for 22 minutes.

I stone-cold nailed it.

The front loaf is shiny because SLW slathered it with butter before I could grab my camera. 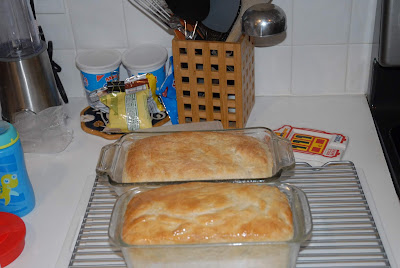 Out of the baking dish the loaves held their shape. 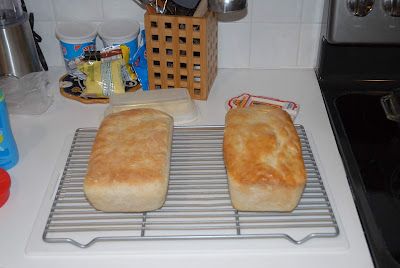 And FINALLY.......bread with some structure! 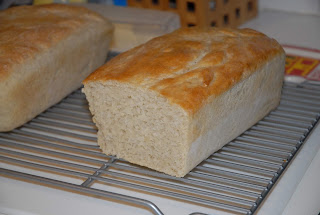 It cuts easily and stays together, it's light and airy, a little chewy in a good way, and the crust came out great, but a little thin. So the next time I'll bump the time up to 25 minutes to compensate for it being in a glass dish, which will develop the crust a bit more.

So I'm officially announcing I can bake bread! This bread. With this recipe. At this location. YMMV!

Stay tuned for cinnamon rolls. The flour company website has some "Baker's Tricks" to keep them from getting rock-hard in a day or two, and I'm itchin' for some cinnamon rolls.....
at January 22, 2020