I was just up at The Kids place to tend to the dogs, and in a 90 minute round-trip (including doggie time) the temperature has dropped 10*, and the winds are kicking up.

And since the winds are predicted to be 30MPH or so, with gusts to 40MPH, I lashed the fence gates closed on the side leading to the back yard. I guess I'm getting acclimatized to here, as yesterday I drained and stowed the garden hoses and sprinklers, put the cold weather covers on the faucets, brought in the big sun umbrella after knocking the wasps out of it, and in general tried to clear the task list for "Winter Preps".

My Sweet Little Wife has departed on a three week vacation, and The Kids are gone until Sunday night, so Pebbles and I are on our own.

And I got this "present" on the way back from DIA: 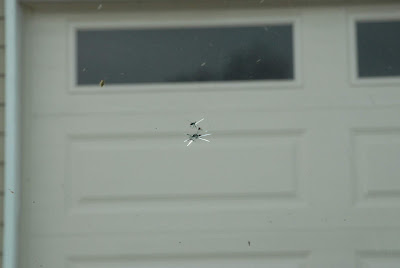 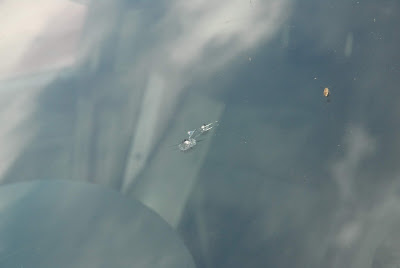 Yep...a BIG rock came off the back of a gravel hauler, and I saw it milliseconds before it hit with a CRACK! like a rifle shot.

I'm tempted to tray and have it repaired, BUT with the rain/snow, and below freezing temps the next two nights, it might get much worse before I can get it in to the glass shop.

I haven't lost a windshield to a rock hit since about 1986, so I suppose I'm overdue.