Well time sure flies when you're keeping busy!

Got the 3D printed camera mount so I can strap my GoPro to the car, And the taller tires for it so it can bounce off these wacky curbs easier. And that requires changing the pinion gear on the motor to make up for the taller tires. So as of right now, I've got the car partially disassembled to change the pinion gear, do some inspection of the bits, and then put it back together so I can go bombing around the neighborhood again, and TLG can giggle and laugh as he watches me get better at driving it.

And I corrected the error on the timing cover by sanding off the yellow I had applied, and then kept on sanding until the wrinkle paint was completely removed from the lettering.

Took about two hours with numerous small pieces of 220 and 600 grit paper, and a teeny-tiny sanding block I made. Got the first coats of color on it, and it looks the way I wanted from the beginning.

I took a trip up to the "E-Team Hobbyplex" track ans store the other day, and I'm impressed! The owner is another Old Guy like me, and he's been doing R/C cars, trucks, and boats for about as long as I have. He's also an Uber Gearhed, and has quite a collection of AMC muscle cars. He has Javelins, AMX's, a Rebel Machine or two, and the S/C Rambler, which was AMC's version of the Chevrolet Nova SS, a "compact car" stuffed full of V8 power with a manual transmission, limited-slip differential, cold air hood, and a bunch of other "Hot Rod Parts" installed at the factory. Cool little cars!

And the track is impressive. It's set up as a road course right now, but they put some temporary ramps, jumps, and stuff over it, and run indoor off-road events. They even run a "class" for the ARRMA Senton truck like I have, so I'll probably go up there with the Senton and have some fun. He's been in the building for over 15 years now, and has parts out the wazoo, along with cars and trucks from $150 entry level rigs up to the full-blown, very high-end cars that go for $1200 without wheels, tires, motor, speed controller, or radio. You can't even call those kits "rollers" because they don't have wheels included, so they're called "sliders".

And I knocked out some quickie projects in the basement, including rebuilding the Heathkit IM-103 Line Voltage Monitor I got on eBay. 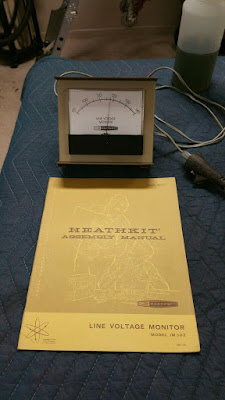 I've always wanted one of these things because only the Really Cool Guys had them when I was a kid. The guys who had their Amateur Extra class license, and knew everything about radio. Like all items this age with 1960's vintage electrolytic capacitors in them, this one had a bad capacitor. So I ordered a few of them, along with a 5W replacement for the 2W resistor that is dissipating 1.8Watts in normal operation. Running a part at 90% of it's max rating isn't a good idea, so doubling the Wattage rating on the replacement fixes a design flaw in the meter.

And I've been cleaning up stuff out of the basement by dumping it on eBay. It brings in some "hobby money", and gets rid of some of the bubble wrap stored in the basement from when we moved.

Hell yes, I saved it! Only used once, perfectly clean, and why buy more when I have a two year supply!?

Just doing my part to be green, and recycle responsibly, ya know?

And I showed TLG the video I took of UP 4014 last week. When they blew off the steam, and then blew the whistle, he was quite impressed! There's a "Vintage and Antique Toy Show" this Saturday down at the Larimer County Fairgrounds (aka "The Ranch"), so I'm going to head down there and see if I can find him a little toy tractor. Gotta be green and yellow because he gets really excited when he sees a green and yellow tractor, so he should have one.

Hope y'all have a good weekend. Sorry for no pretty pix, but when I start taking pix, it slows me waaay down on some of these projects.
at October 03, 2019

Update On The Pioneer SX-780 and Speakers

Sooooo....I dragged the two speakers I made some time ago out of the basement, and set them up with the SX-780. When I used these speakers ...